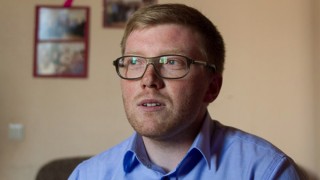 The Petition „Linguistic rights of Poles in Lithuania”, handed to the European Parliament in 2011 by a lawyer from Gdańsk Tomasz Snarski, has finally received an answer from the Lithuanian government. Tomasz Snarski has told Wilnoteka about his view on the response and what will happen with the problem of linguistic rights of Poles in Lithuania in the forum of the European Parliament.

Ilona Lewandowska (Wilnoteka.lt): After a long time, your petition “Linguistic rights of Poles in Lithuania” has finally received an answer from the Lithuanian government. Would you like to make a comment about it?

Tomasz Snarski*: First of all, I am satisfied the response did come. On the other hand, its content is completely unsatisfying and I do not agree with any of its statements. It should be noticed however, that because the Lithuanian government officially responded to the petition of a common citizen, we went a step further towards the growth in the importance of human rights and of civic institutions including the petition to the European Parliament.

Up till now the Lithuanian authorities claimed the issue is not the competence of the European Parliament. What is more, they said the European Union is not an adequate place to investigate the issues raised in my petition, such as the criticism on the lack of respect for the human rights in the member country. Although such approach is ridiculous, they demanded closure of the investigation into the petition without taking any action by the European Parliament.

Now we can see, that faced with the substantive arguments based on the human rights and on the European Union’s mechanism of action the Lithuanian authorities were mobilized to answer, which means they cannot claim any longer that the discrimination of Poles is an inner problem of Lithuania and they have to admit the problem is European in scope. Thus we should appreciate the answer itself without regard to its content.

I.L.: Which questions are left without answers? And which answers are unsatisfactory?

T.S.: In the petition, I have raised a number of subjects regarding disobeying the linguistics rights of Polish minorities in Lithuania, emphasizing the following problems: it is not possibile to use names and surnames in the native language officially, there is no bilingual map symbolization, minority’s language is not an interlanguage in the regions populated by the Polish minority. Moreover, I have raised issues related to the educational reform and to the lack of legal framework concerning national and ethnic minorities’ rights in Lithuania. It is the absence of a national and ethnic minorities act regulating comprehensively the rights of minorities’ members, which shows country’s deficiencies with respect to the human rights.

As the result of my actions, Members of the Parliament’s and human rights organizations’ involvement ( i.a. European Foundation of Human Rights) and debates of Committee on Petitions of the European Parliament, the chair of the Committee wrote an explicit and a very precise letter, in which she requests the Lithuanian government to give a response to the presented problems. The letter was based on the Charter of Fundamental Rights of the European Union, on the EU’s law, on the responsibility of protecting human rights by the EU’s members which is the general rule of the European law, in other words, it was based on the arguments I have raised in the petition and during the Committee’s debate in April 2012. They asked Lithuanian government for an explanation what specific actions it is going to take in order to guarantee Polish minority in Lithuania the basic rights.

The Lithuanian government’s response can be described as vague. The letter includes a number of references to the declaration concerning the necessity to protect human rights, as well as it ensures the Lithuanian government treats the minorities’ rights seriously. However, there is not any legally binding solutions. There is a piece of specific information concerning institutional solutions, namely the announcement of establishing the government’s department on the national minorities issues in July 2015.

In the letter however, the problem of using the minorities’ language as the interlanguage, which is a standard in the EU countries, has been omitted. The Lithuanian government talks about providing a translator if One does not speak Lithuanian, as if they do not uderstand how the popular in the countries of EU systemic solutions work.

The content of the letter also shows the incompetence of the authors, who do not differenciate such terms as “national minority” and “ethnic minority” and who do not use the knowledge of the legal solutions in the field of human rights respected in Europe. In the document there are too many declarations about future plans and too less specific steps. However if there are any declarations, we should refer to them and constantly demand their implementation in the nearby future.

Please note, that de facto an individual has been equated with the country, because a citizen of an EU member took a stand for the human rights in the another EU country. It is hard to imagine a better example of European communion of values and solidarity. It has to be noticed that thanks to the petition, several substantive formulations regarding human rights in EU member Lithuania were prepared.

The European Commission presented their analyses of the petition, alas they are very unprofessional. From the beginning I was aware the petition will be fought and striving for its examination will demand a huge engagement, concerning not only the dealings with the Committee on Petitions of the European Parliament but also the mass media’s and academic centres’ interest in the issue.

I consider the establishment of the forum for the substantive debate on human rights as the most important result of the petition. I wanted to stand for the rights of my countrymen living in Lithuania because I see their situation unfair and unacceptable. In my opinion, the progression of the case shows that the citizens of the European Union expect protection of their fundamental rights from the EU, but sadly the EU has not decided yet in which direction it will move – either it will treat seriously its commitments in relation to human rights or it will leave them as only beautiful declarations.

My documentation of the petition has 17 volumes. There are formal and private letters, articles from newspapers and research papers, applications addressed to a number of institutions and organizations. I would compare petitioning the European Parliament on the other country’s problems by an EU citizen to the biblical fight of David and Goliath. It might have seem there is no chance for the success, however in real life the power of legal arguments sooner or later wins against historical or political conditioning.

I.L: Can you describe the protection of the national minorities’ rights in Lithuania in comparison to the other European countries?

T.S.: Human rights and democratic rule of law are the fundamental values the EU is based on. EU and its members are obliged to obey these rules. Actually, in each European country there are national minorities problems and the issues of protecting their rights. The standard legal solutions include the guarantee for the national minorities rights in the form of an enactment (there is no such law in Lithuania), provision of the right to cultivate and to develop their tradition and culture. This also includes the linguistic rights.

I.L: What will happen with the petition next?

T.S: It is hard to predict, the decision is up to MEPs and the Committee on Petitions of the European Parliament. I would like to strive for at least the next public debate veryfying the response of the Lithuanian government. The situation of Poles in Lithuania is still unsatisfactory and contrary to the human rights standards in the EU. What is more, because the petition has been investigated for a long time The European Union Agency for Fundamental Rights should take the case as an independent reseach institute. We should not expect that any body of the European Parliament will pass a judgement.

The process of investigating the petition is important because it is used to make a serious problem widely known. In my opinion, the investigation of my petition by the main body of EU for a few years favours other actions which aim to guarantee Poles in Lithuania the fundamental human rights and so to win a normal situation present in any democratic, EU country.

* Tomasz Snarski – a lawyer, a lecturer, a social activist and an originator. Since 2009 he works as academic lecturer in the Faculty of Law and Administration of the University of Gdańsk. From 2010 to 2012 he was a founder and an editor-in-chief of the newspaper published by the Faculty of Law and Administration of the University of Gdańsk. In 2012 in cooperation with the Gdańsk University Press he published his first book of poem “Przezpatrzenia”. His research interests are criminal law, human rights, theory and philosophy of law (especially the transitional justice and the relations between law and morality) and certain aspects of multiculturalism i.a. legal protection of national and ethnic minorities. A human rights activist. The founder and the supervisor of the Gustaw Radbruch Interdisciplinary Students Research Circle on Human Rights Of Gdańsk University. The tutor of the human rights section in the Student Legal Clinic of Gdańsk University. In March 2011, he addressed a petition to the European Parliament regarding the linguistic rights of Poles living in Lithuania, which has been investigated by the European Parliament till today in spite of the Lithuanian authorities protests.

Wilnoteka has written about the petition for the last four years. We encourage you to check out the other articles on the issue:

On the basis: inf. wł