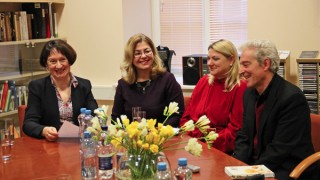 During the summary of the competition "The lesson about Poland" in the Polish Institute in Vilnius, Fot. Teresa Worobiej

“The lesson about Poland” – the competition for teachers organized by the Polish Institute in Vilnius and the Ministry of Education and Science of the Republic of Lithuania. Among the 12 finalists of the competition there were three teachers from the Polish schools located in Vilnius: Danuta Korkus from the Władysław Syrkomla’s High School, and Joanna Szczygłowska and Wanda Andruszaniec from the J.I. Kraszewski’s Secondary School. The remaining teachers work in the Lithuanian schools situated in Kaunas, Mažeikiai, Palanga, and Pasvalys.

The Polish Institute in Vilnius asked teachers to prepare and perform a series of lessons about Poland. All subjects including Polish, mathematics, geography, and physics were allowed. The organizers received applications from all around Lithuania. 12 projects were chosen. Małgorzata Kasner, the chairperson of the Polish Institute in Vilnius, said that the projects were very interesting and that teachers were extremely creative.

The winner of the competition was Algirdas Keblikas, the teacher of mathematics from the Gen Povilas Plechavičius’ Cadet School in Kaunas. He prepared a series of lessons dealing with mathematics with the usage of the popular game called “The Wheel of Fortune”.

The second place was awarded to Danuta Korkus. During her Polish and literature lessons the pupils created a comic book based on Henryk Sienkiewicz’s “The Teutonic Knights”. “We discuss “The Teutonic Knights” in the seventh grade. The book is difficult for the contemporary 14 year olds, and Sienkiewicz’s language incomprehensible. However, we cannot exclude it from the curriculum because the topic of the Battle of Grunwald, and the Polish-Lithuanian alliance is very important for our culture. When I learned about competition “the lesson about Poland” I suggested to my pupils that we could create a comic book based on the fragments of “The Teutonic Knights” that describe the Battle of Grunwald. Comic as a literary genre is much more comprehensible for the 14 year olds. Additionally, we learned the history of comic books, and the history of Polish comic books, and its production process. The pupils worked in groups. They were well prepared for the lessons: they brought the photographs of the knights’ armors, they got to know what types of armor were used, they learned about heraldry. Then they created comics. It was simultaneously a serious work and great fun” – told Wilnoteka Danuta Korkus.

Three projects gained the third place in the competition. Julia Baniukiewicz from the Center of the Informal Education prepared a series of lessons devoted to nanotechnologies. Ramunė Grikštaitė from the Vladas Jurgutis’ Elementary School in Palanga prepared a lesson titled: “The mysterious cube”, whereas Lena Chvičija from the High School in Turgeliai told her pupils about the modern Polish urban planning and design.

The authors of the most interesting lessons received valuable presents from the organizers. Danuta Korkus told Wilnoteka that meeting teachers from other regions of Lithuania was the most joyful part of the competition for her. “It was an interesting competition that integrated us – teachers of various subjects from all regions of Lithuania. We were on a few days visit to Gdańsk during which we got to know one another and exchange our ideas and experiences. Thanks to the competition my pupils had a lot of fun and learned new things. I, on the other hand, had a great satisfaction of meeting wonderful people – fellow teachers. During the summary of the competition Małgorzata Kasner proposed to establish a Polish teachers club – the place where teachers of various subjects from all regions of Lithuania could meet. I think that it is an interesting idea”- said Danuta Korkus.

The next joint project of the Polish Institute in Vilnius and the Ministry of Education and Science of the Republic of Lithuania will be devoted to the 250 anniversary of the existence of Polish theatre.

Based on: 15min.lt, personal information

What kind of investments made Šalčininkai District Municipality?

The surname “Tomaszewski” remains in Šalčininkai. The Central Electoral Commission of the Republic of Lithuania rejected the complaint filed by social democrats.