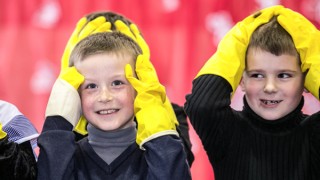 The next Polish school in Šalčininkai (in Polish: Soleczniki) region has been granted high school status. On Friday, the official inauguration of Paweł Ksawery Brzostowski High School in Turgeliai (in Polish: Turgiele) took place. Local authority representatives and parents took part in this ceremony. However, the most important guests were the school pupils.

The mayor of Šalčininkai region, Zdzisław Palewicz, emphasized that the Polish school in Turgeliai being granted the status of high school proves that nothing is impossible. ‘A few years ago, it seemed that we could not expect any positive changes in this village and this school. Fortunately, the proverb ‘Where there’s a will, there’s a way’ worked perfectly in this case. If you really want to achieve something, regardless of any obstacles and problems, you can. And this school proves that in a brilliant way,’ said Zdzisław Palewicz.

In Turgeliai region, P.K. Brzostowski High School is the only Polish school providing secondary education. ‘This is a very important event for us, because thanks to the upgraded status our school can still carry on with its mission. If we had not got through the accreditation process successfully, our school could not have survived. That is why we are so thankful for this accreditation. It is worth mentioning that the accreditation commission gave us top marks,’ said Headmistress Łucja Jurgielewicz.

There is also a Lithuanian school in Turgeliai. What is striking is that, in 2014, the Polish school students achieved better Matura examination results in the Lithuanian Language and Literature than their peers from the Lithuanian school. This was one of the factors which contributed to the accreditation being granted to P.K. Brzostowski High School. Before the commencement of the accreditation process, the school was extensively renovated. ‘Since 1968, the school had not been renovated at all. During the celebration of the 150th foundation anniversary, the mayor, Zdzisław Palewicz, promised that the building of the school would be insulated and classrooms, as well as the gym, would be renovated. Thanks to the help of local authorities and the “Polish Community” Association, now we have, in a sense, the new school,’ said the Headmistress.

The school in Turgeliai is the oldest school in the Šalčininkai region. In 1729, a Sunday school was established there. In 1769, on the initiative of the canon (priest), Paweł Ksawery Brzostowski, a school for the children of peasants was set up. In 1862, the owner of Turgeliai, countess Katarzyna Kobylińska, founded a regular primary school. Up until 1921, children were taught in Russian. But afterwards, up until the outbreak of the Second World War, they were taught in Polish. Later, between 1941-1943, they were taught in Lithuanian. From 1945 the school in Turgeliai was run as a Russian school. Polish classes were formed in 1952. It was then that the primary school was transformed into a high school. In 1998, Paweł Ksawery Brzostowski was chosen as a patron of this school. Since 2001, it has been a Polish school. The 2014/2015 school year marks a new chapter in the history of the oldest educational institution in the Šalčininkai region.

Waldemar Tomaszewski: We should become a power to be reckoned with