Silver-haired twenty-year-olds. Twenty years of the Polish University of the Third Age in Vilnius. 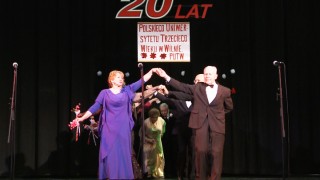 The 20th anniversary jubilee of the Polish University of the Third Age in Vilnius, fot. wilnoteka.lt

The Polish University of the Third Age in Vilnius celebrates the 20th jubilee of its existence. “We were the first in Lithuania” – proudly pointed out doc. Dr Ryszard Kuźmo. People do not have to lose joy and enthusiasm as they get older. The oldest students in the city proved that their ideas and energy might be envied by their much younger counterparts.

The guests attending the jubilee of the Polish University of the Third Age in Vilnius realised that people in their 70s could also be full of energy, creative and open to new experiences. The meeting was an opportunity not only to reminisce, but also to demonstrate how the University operates.

Today, the Universities of the Third Age operate all over the world. The beginnings of the movement date back to 1972. At that time the professor at the University of Toulouse, Pierre Vellas, organised a meeting of 40 seniors to find out what they expected from the academy. There were three ideas suggested back then: the capability of the Medial University should be used to promote the knowledge about staying healthy in the old age, the promotion of the knowledge about culture should be enriched with the experience and knowledge of the elderly, the research potential should be focused on solving the problems of the elderly and the old age.

The idea turned out to be really important – the first U3A (The University of the Third Age) was created in France in 1973, and twenty years later there were over 40 institutions like this in the country. Poland was the third country in the world (after France and Belgium) in which the U3A movement developed. The first Polish U3A started operating as early as 1975, at the same time as the institutions in Switzerland, Italy and Canada. Twenty years later, Poles from the Vilnius Region started to set the organisation up in Lithuania.

The beginnings of the Polish University of the Third Age in Vilnius were not easy – twenty years ago the group of about 30 students did not have much, except for the enthusiasm to create the University. The biggest problem was the lack of a proper place. All the more reason now to appreciate the good conditions provided by the Polish Community Centre in Vilnius.

Students at the Polish University of the Third Age in Vilnius do not separate themselves from the rest of the society. People attending lectures are eager to get involved in social and cultural actions; they take part in cleaning Vilnian cemeteries, visit hospice patients, and work in different organisations. No wonder then, that they have so many friends. And most of those friends took part in the jubilee. Among the guests were Consul General of the Republic of Poland Stanisław Cygnarowski, Member of the Seimas of the Republic of Lithuania Józef Kwiatkowski, the director of St. Michael Sopoćko Hospice in Vilnius Michaela Rak, the chair of the Social Committee for Care of Old Rossa Janina Gieczewska, the chair of the Polish Section of the Vilnius Community of Political Prisoners and Exiles Apolonia Skakowska, the chair of Stanisław Moniuszko Center for Polish Culture in Lithuania, and many other community activists. There were also present a painter Władysław Ławrynowicz, and a poet Andrzej Śnieżko, who dedicated his poem “Srebrnowłosy dwudziestolatek” (“A Silver-haired twenty-year-old”) to the jubilarians.

Lectures at the Polish University of the Third Age in Vilnius take place once or twice a month. They are usually concerned with the aspects of health and well-being of the elderly, i.e. medicine, gerontology, geriatrics and hygiene. There are also lectures about political science, ethics, law, philosophy, architecture, chemistry, religious studies. The students’ fields of interest are very vast; they like to listen about the newest technological and scientific achievements.

The University maintains close contact with similar institutions, especially in Poland, but also in Germany, Belarus and Ukraine.

Students at the Polish University of the Third Age in Vilnius like sport, long walks and trips. Even though their physical condition is not as good as it used to be, the students of the Polish University of the Third Age do not lose enthusiasm and energy. They emphasise the fact that they like singing and dancing the most. The artistic group “Tęcza” (“Rainbow”) run by Lucja Dubicka has been around since two years; there has also a new dance group led by Ludwika Lisowska been created. Both groups performed during the celebration.

Priest Tadeusz Krahel: I have devoted my whole scientific career to the Vilnius Diocese

Józef Rybak: The case of bilingual street names has been raised because of the approaching elections.