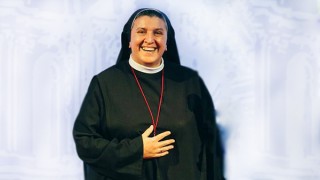 The winner of the 17th edition of the contest carried by ‘Kurier Wileński’ (‘The Courier of Vilnius’) is Sr. Michaela Rak, the founder of the Bl. Michał Sopoćko Hospice in Vilnius. The readers of this newspaper send totally 7 832 coupons. Sr. Michaela Rak received 1 759 votes. Among  this year laureates, there is Walenty Wojniłło, the editior of Wilnoteka.

The contest held by ‘Kurier Wileński’ rewards people who are committed to Polish issues in Lithuania. The procedure of the contest is similar every year: at first, the readers proposes candidates, after that the Award Committee, which includes the laureates of the previous editions, and the representatives of editorial board, choses top ten candidates, who deserve the Award in the largest extent.  The ultimate decision, who will win, is taken by the readers of ‘Kurier Wileński’ who send the coupons cut from the newspaper and fill them with the name of their favourite candidate.

Votes were counted by the laureates of the previous editions: Anna Adamowicz, an organizer of cultural activities and a lecturer of the Vilnius School of Technologies, Business and Agriculture in Baltoji Voke (in Polish: Biała Waka, the city in the Vilnius region); Antoni Jankowski, the president of the Polish University of the Third Age in Šalčininkai (in Polish: Soleczniki); Zdzisław Palewicz, the mayor of the Šalčininkai region; Maria Rekść, the mayor of the Vilnius region; Edward Trusewicz, the secretary of the Association of Poles in Lithuania, the former Minister of Culture in the Repulic of Lithuania; and Wacław Wołodkowicz, the prelate priest, the parson of St. Peter the Apostle parish in Šalčininkai. The representatives of ‘Kurier Wileński’ editorial borad were Robert Mickiewicz, the editor-in-chief, and Andrzej Podworski, the commercial director.

The list below presents this year laureates of the contest ‘The Pole of 2014’:

The official gala with the most popular Poles in Lithuania in 2014 will be held on the 1st of February at 4 PM (16:00) in the House of Polish Culture in Vilnius.