Roman Gorecki: As my ancestors, I also value freedom the most 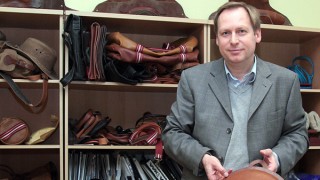 On Christmas Eve we talked with Roman Gorecki, the descendant of Adam Mickiewicz. It just so happens that on  the 24th of  December is 216 anniversary of the birth of the great poet – the great-great-grandfather of our guest.

You were born in Paris and then lived there for many years. What brought you to Vilnius?

I came here for the first time 15 years ago. It happened that I started a small business and inevitably had to come here often. I circled between Paris, Vilnius and Warsaw, where I also had a small enterprise. My company manufactures leather goods, including saddles. The entire production is intended for foreign markets. My family lives in Vilnius. I have a daughter who attends a French school there. For a time I was a headmaster of this institution, now I am the president of the School Council. I care about the organization of work in school and I do it on a social basis. I am very happy that I can be socially active.

Your surname is Gorecki. It is a particularly valued family in Vilnius and former Borderlands. Tell me  few words about your ancestors of this line.

Let me start with my great the great-great-grandfather, Antoni Gorecki, who was born in 1787 in Vilnius in a family of wojski, Walenty Gorecki, of Dołęga coat of arms and Anna of Reutt. He was the fourth and the youngest child. In 1802 Antoni joined the Department of Literature at the University of Vilnius. During his studies he became friends with Joachim Lelewel. In 1805 he graduated with honors and during this time he began to show his poetic talent. He made his debut in ‘Dziennik Wileński’. When he was 19 years old, Antoni Gorecki began his military service in the Duchy of Warsaw. He became an officer. Even in the army he did not stop writing. Among others, he was a valued author of camp songs. After the battle of Mozhaysk Napoleon made him a Knight of the Legion of Honour. He was greatly affected by the defeat of the French army.

And then he arrived to Vilnius?

After leaving the army in 1815 as a capitan, Antoni Gorecki settled in the family estate of Dusinienai. It is a small town near Vilnius alongside Czarny Bór, cut by the Rudomianka river. However, he did not stay there for long, as a year later he decided to travel through Europe. He was still writing a lot. He published his poems mostly in ‘Dziennik Wileński’ of Józef Zawadzki’s bookstore in Vilnius.

Did he return to Dusinienai?

In 1818 Antoni got married with Weronika Eydziatowicz, a daughter of a landowner form the Augustów Voivodeship. The young couple settled in Dusinienai. Since then he shared his time between Vilnius and his family estate. Soon their son Tadeusz was born. Then respectively-  Ludwik and daughters: Róża, Kamila and Anna. The house of Gorecki was always open for guests. I’ve read that the Vilnius Palace of Gorecki on Dominikańska street was also known for its hospitality… Indeed, the Goreckis often organized social meetings, about which the whole town knew. The jet set of the intelligence of Vilnius gathered there, and the host very often improvised some poems during the meal. Let me add that meeting were held there during which they debated how to help students- the Philomaths and filarets sentenced to expulsion from the university, and later imprisoned in various parts of the city.

Under what circumstances Gorecki left Lithuania?

The year 1831 was approaching. In January at the initiative of Joachim Lelewel the Centarl Vilnius Committee responsible for the organization of the uprising in Lithuania was established. Antoni Gorecki was also its member. Soon he became a Chief of Staff. He worked in Vilnius, Wilkomierz and Telsiai. In the Gorecki Palace the preparations for the November Uprising took place. After the fall of the insurrection he had had to emigrate to France, leaving all the goods, which were soon confiscated by the tsarist government.

What happened to him next?

Many Poles emigrated at that time. Paris then counted 500,000 residents, of which about 20,000 were Poles – emigrants. There was great solidarity among them. On the initiative of Antoni Gorecki a Polish school was established that still exists today. He was also one of the founders of the Les Champeaux cemetery in the town of Montmorency. The landscape of the village resembled him Lithuania, so he decided to set up the cemetery right there. This place is often called a necropolis of Polish emigration. On this Pantheon both my great-great-grandfathers were buried- Antoni Gorecki and Adam Mickiewicz. The body of the latter was brought here in 1856 from Istanbul, and in 1890 his ashes were buried in Wawel, in the crypt of national poets. In this Celina Szymanowska is buried, a famous pianist, the wife of Adam Mickiewicz. The Mickiewiczs family tomb still exists today. Is Paris a meeting place of Mickiewicz and Gorecki? In 1857, the son of Antoni, my great-grandfather Tadeusz Gorecki married Maria Mickiewicz in Paris, the eldest daughter of Adam and Celina of the Szymanowskis Mickiewicz. Tadeusz was a talented painter. He left many paintings, for example of his father in-law, Adam Mickiewicz, as well as an unfinished series of illustrations to “Pan Tadeusz”. Some of his works are in the collections of the Lithuanian Art Museum in Vilnius. Before his death, Tadeusz Gorecki visited Lithuania. It so happened that his son Ludwik, a famous Parisian ophthalmologist, also came here and visited Dusinienai before World War II. In 1955, while in Lithuania, the son of Ludwik, Jerzy Gorecki, a French journalist, visited it as well. Then he dug a little spruce, took it to France, where he planted that tree so it could reminded him of Lithuania – the homeland of the ancestors.

Did you try to regain Dusinienai?

Yes, I did, but with no success. Let me remind that in 1929, nearly a hundred years after the confiscation of property by the tsarist, the Polish authorities gave it back to its rightful owners. Maybe so happens that also I after a hundred years of confiscation in 1940 by the Government of the Socialist Republic of Lithuania will reclaim goods legally belong to me.

We talk in Polish, you live alternately in Vilnius and Paris …

I was born in Paris. At home we spoke French. I learnt Polish while working in Poland, just as Lithuanian. I know Spanish, Italian, English.

And you feel to be of what nationality?

French! I am a citizen of France.

But now you live in Vilnius?

I feel comfortable here, mostly because of I value freedom the most, just as my ancestors. And here I feel free. I can spend three days a week for my community work at the school of my daughter and I don’t have to deal with anything else. Besides Vilnius is a unique city. This is probably the only European capital where most of the residents who were born here and grew up on a daily basis with ease speak three languages – Lithuanian, Polish and Russian. There are no language problems here. When I came here, I did not know Lithuanian language. People with whom I met were so tolerant that I never experienced the language barrier.

What does your daughter know about her ancestors?

When she sees portraits or Vilnius monument of Adam Mickiewicz she says that this is her grandfather Gilles, who is my father. They look that similar. She speaks a little Polish, because she had a Polish sitter. Her French and Lithuanian are fluent, and she speaks a little English.

Did you give a Mickiwicz’s death mask to the Vilnius Museum of his name?

It was one of the souvenirs that was preserved in my family home. As a child, I slept in the nineteenth-century Parisian Adam Mickiewicz’s bed. I gave it to the Poznań Museum of Literature.

Do you know works of Mickiewicz?

Yes, I do, I read some of his works in French. My favorite character is Konrad Wallenrod.

Where will you spend this year’s Christmas?

In Vilnius, with my family. Christmas here are quite similar to those in Paris. Only dishes are different. You have fish, and in France we eat a lot of meat, pie of gees’ livers and good wine.

Hoy, off we go with jingle bells… Christmas in the Vilnius Region