Ana or Anna? The Ministry of Justice initiates discussion 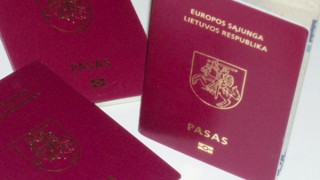 The Ministry of Justice of Lithuania has initiated a discussion on the spelling of non-Lithuanian names in documents. There has been a lot of talk about this lately, among others, in connection with the case of a well-known basketball player, Darjuš Lavrinovič, who fought in court for the right to name his daughter Leyla. The registry office did not agree with this variant of the name, arguing that it does not comply with the standards of the Lithuanian language.

Edita and Darjuš Lavrinovič were unable to register the child for three months because the Vilnius Civil Registry Office did not agree to register the girl’s name as Leyla. Therefore, the parents turned to the court. At the court’s request, the State Commission of the Lithuanian Language presented its opinion. The linguists replied that in the Lithuanian language, there is no combination of the letters ‘e’ and ‘y’, so the name should be spelled as Leila. Ultimately, however, the court took the side of the parents.

This is not the only case of this type that has been brought before the court in Lithuania. Lithuanian citizens also exert the right to spell names in their original form in the international rule of law institutions.

Currently, Lithuania has no law that would regulate how to name children or spell names in documents. Registries, when accepting parents’ applications for a child to be named, follow the Civil Code, the State Language Act, and regulations approved by the Ministry of Justice. Usually, parents who wish to give their child a non-Lithuanian sounding name, receive a negative response. Admittedly, in the Registry of Citizens of Lithuania there are people named Amelia, Jesica, Teo, etc., but this is due to one of the parents being a foreigner and the child having been registered abroad.

Therefore, the Ministry of Justice initiated a discussion on the spelling of non-Lithuanian names. Civil registry offices, the State Commission of the Lithuanian Language are judicial colleges are to express their views. First, however, the ministry wants to consult the public. The Delfi portal has published a poll consisting of two questions.

The first one reads as follows: Can the Lithuanian language rules be omitted when registering names in Lithuania? For example, can the name Sofia be spelled without ‘j’, Gabrielle with a double ‘l’, Anna with a double ‘n’, etc.?

The second question concerns the registration of names which differ in spelling and pronunciation. For example, can the name Nikolė be written as ‘Nicole’, Džonas – as ‘Johnas’, Šarlotė – as ‘Charlote’?

Problems of the Vilnius branch of the University of Bialystok