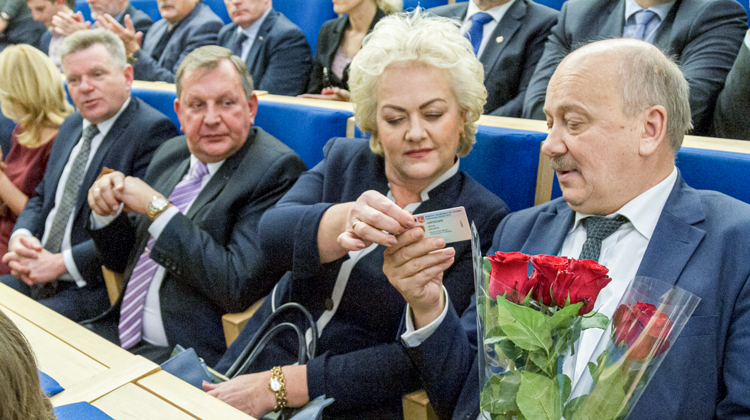 The investigation is to clarify whether, through Irina Rozowa, the Russian authorities have tried to influence political processes in Lithuania; Fot. Marian Paluszkiewicz

The Parliamentary Committee on National Security and Defense proposed to initiate a parliamentary investigation regarding MP Irina Rozowa, who did not receive access to classified information because she concealed contacts with Russian diplomats. The parliamentary inquiry is also to examine the attitude of the chairman of the Seym RL Viktoras Pranckietis and the former chairman of the Seym Committee of National Security and Defense of Vytuatas Bakas. – It seems to be a huge stone thrown towards the new ruling coalition. Rozowa is not a well-known person but she is a member of the coalition. The second issue concerns the AWPL-ZChR itself and its “eternal” alliance with the Russian Alliance. The discussion has been going on for a long time whether the Polish party should draw up a joint list with the Russians. The election will take place next year, so AWPL-ZChR will have to seriously consider the strategy – Dr. Andrzej Pukszto- political scientist from the University of Vytautas the Great comments the situation for “Kurier Wilenski”.

According to the researcher, the matter may affect the coalition’s popularity in society.

– The opposition will definitely keep on raising this issue. The investigation may also plunge the chairman of the Seym RL – emphasizes the political scientist.

The parliamentary investigation is to clarify whether the activities of the chairman of the Russian Alliance, which belongs to the AWPL-ZChR parliamentary faction, are contrary to the interests of the state and constitute a threat to national security.

Chairman of the National Security and Defense Committee, Dainius Gaižauskas from the Lithuanian Union of Peasants and Greens, believes that the investigation should focus on three cases. It is necessary to determine the specific actions of the deputy, explain whether through these actions the Russian authorities have tried to influence the political processes in our country, and it is also necessary to clarify the position of the chairman of the parliament Viktoras Pranckietis and the former chairman of the National Security and Defense Committee Vytautas Bakas after they received information about Rozowa from the State Security Department. The committee will also have to answer the question of whether the Sejm should initiate an impeachment procedure for a deputy. Gaižauskas announced that the investigation is to be completed by November 6.

According to information published by the Department of National Security, Irina Rozowa, incl. in 2011, along with several Russian Alliance activists, she tried to engage Russian diplomats to influence the process of forming a political coalition in the capital’s local government council.

In 2012, the politician consulted representatives of the Russian diplomatic corps election program and possible election results. During the talks, the topic of creating a joint political creation consisting of the Alliance of Russians and AWPL-ZChR was raised.

According to the security department, the chairwoman of the Russian Alliance maintained contacts with the Consul General of the Russian Federation in Klaipeda, Vladimir Malin, who was expelled from the country in 2014 “for activities contrary to diplomatic status.” Usually in diplomatic language it means espionage.

In addition, Rozowa was to discuss the financing of the election campaign with diplomats. The conversations took place in an informal atmosphere, in cafes and restaurants located outside the city center.

The department informed Pranckietis about the activity of Rozowa in January 2018. The report stated that “in accordance with art. 17 clause 2 point 11 of the Act on state and official secrets, VSD objects to Rozowa obtaining a work permit with secret information. ” Pranckietis did not disclose the information to the public.

Pranckietis rejects the allegations, arguing that the committee should focus “not on specific individuals, but examine the Kremlin’s overall impact on the situation in Lithuania.”

“I would love for the National Security and Defense Committee not to become a certain tool with a predetermined goal. The Committee should not disturb its image in the eyes of the citizens, “said the chairman of the Seym SL on Žinių radijas Wednesday.

According to Andrzej Puksztyn, responsibility lies not only with Pranckietis.

– This also applies to Vytautas Bakas and the parliamentary board. However, the greatest responsibility lies with Viktoras Pranckietis, because according to the constitution the chairman of the Sejm is the second person in the state. He should therefore have a flawless reputation and be beyond all charges, he comments on for “Kurier Wileński. “

Dobrowolska: How to officially remain a Pole in Lithuania

Nationality in the Hands of Politics: Lithuanian-Polish About Names Adapted to Lithuanian Language, Relationship With Poland…

The questions of national minorities in Lithuania are pushed aside or, after conflicting the society, remain…
Other November 17, 2020

The Difficulties That the Students, Belonging to National Minorities, Face, Have Opened up Another Difference of…

Students, whose mother tongue is not Lithuanian, barely speak it, sometimes don’t at all, except for…
Other September 18, 2020