A rally on the return of land to its rightful owners 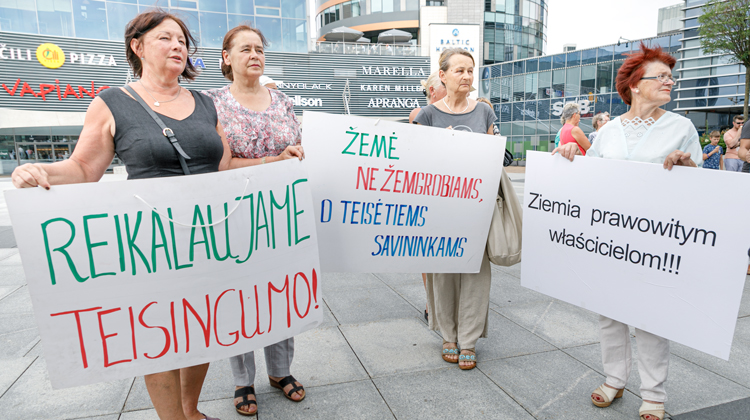 The picketers had with them posters "Earth - rightful owners", "We demand justice"; Fot. Marian Paluszkiewicz

The staroste of the faction of the Electoral Action of Poles in Lithuania – the Union of Christian Families in the Vilnius City Council, Zbigniew Maciejewski, in an interview with “Kurier Wileński” noted that the issue of land return is one of the priority.

We support the protest and we will help in the recovery of the land in all possible ways. For us, the most important question, in addition to the behavior of Polish schools, the spelling of names, is the return of land. Theft of property has allowed theft of the state and robbed people should be returned to their homeland. Certainly, these plots can be found so long as there are good intentions at the state level. Local government can form plots, and we did this, but they must be for return. About 900 plots were formed, but this is not enough. Vilnius has opportunities, the rest depends on the good will of the ruling elite – said Zbigniew Maciejewski.

The councilor of the capital’s self-government on behalf of AWPL-ZChR, Renata Cytacka, emphasized that the most violations in the field of land return are in the Vilnius region.

Czesław Tomaszewicz from Czarny Bór belongs to the group of people applying for the return of patrimony. His family owned several hectares of land in Vilnius Antokol and at ul. Vismaliukų, in the former village of the string colonies of Wysmałki.

– For decades of Soviet rule, the land was overgrown with forest and now it turned out that the forest must not be returned. The forested urban areas belong to the nearby Vilnius University. As it turned out, the university can take the forest, and I, the rightful owner, do not have the right to it. If a university needs my land, let it buy it from me or lease it – says Czesław.

It has been possible to recover some of the land in Antokol, but it is only a scrap.
– Four plots were allocated to the plot belonging to the university. A high-voltage power line runs along one of them, covering an area of ​​9 ares, and a municipal water supply system runs under the other 9-ares. At most, I can sow the lawn on these plots of land, because you can not build anything on them – the interlocutor regrets.

The court is waiting for another piece of land of his patrimony in the former village of the Wysmałki cord colonies in the north-east of Vilnius. In the same area, 18 owners cannot recover.

Many people gave up legal battles for the return of land, powerlessness. It should include to them a Vilnius citizen, Jan Kaszkiewicz.
– The land in Wołokumpia belonged to my family. Part of the patrimony in this district was regained. They offer the remaining part for the land not returned in a different place in the form of a forest plot with a meager market value – Vilnian does not hide the regret.

Completion of the process of restoring ownership of land in 2019, forests and water reservoirs to residents is one of the tasks of the National Agricultural Service (NSR) at the Ministry of Economy of the Republic of Poland. According to NSR data published on the website of the National Agency of Earth, this process is coming to an end – property rights have been officially granted at 99.95 % of the area indicated in the applications.

“Complete ownership of the land has been restored in 50 cities in Lithuania. The land return in 2019 could in principle be completed, but it will be particularly difficult to do so in Vilnius. The Vilnius City Council administration has not yet submitted sufficient plots for delivery. Currently, 3076 citizens are awaiting the return of the land, ”says Laimonas Čiakas, head of the National Land Agency (NŽT).

We’ll have the textbook! But not the right one and not in September