The President of Poland to the countrymen: Thank your that you are Poles 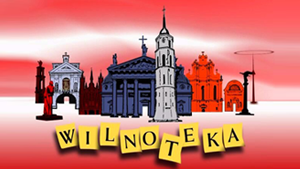 “I am here to pay due thanks to you for keep Polishness alive, many thanks for teachers who teach Polish. Thank you to all those who shape teachers here. Thank you to all those who care for Polish schools, for Polishness, for Polish culture. I am very much committed to you”, said Polish President Andrzej Duda during a meeting with his countrymen at the Polish Culture Center in Vilnius. The President decorated 18 representatives of the Polish community in Lithuania with high honours of the Polish state. Among the honoured is our editor Edyta Maksymowicz, decorated with the Knight’s Cross of the Order of Merit of the Republic of Poland.

After landing at the Vilnius airport, the presidential delegation went to Ostra Brama. Another point of the President Andrzej Duda and Agata Kornhauser-Duda visit to Vilnius was the House of Polish Culture.

“Thank you very much for the opportunity to meet you here in Vilnius, right after my arrival, at the House of Polish Culture with my compatriots, whose homeland is Lithuania. You are at home, you were born here, you live here and here you are Poles, citizens of Lithuania. Thank you very much for this in the name of the Republic of Poland. I congratulate all those who received state honours, each of whom I told that on behalf of the Republic I would like to thank you for this activity for the Poles and for the Polishness you lead here. As President of the Republic I would like to thank all of you – for being here, for action, for the work, for serving the Poles, for Polishness” said the President of Poland.

The Knight’s Cross of the Order of Merit of the Republic of Poland, Polish President Andrzej Duda granted the journalist Alwiga Bajor, doctor, co-founder of the Society “Always Faithful Five” Hanna Balsienė, pr. Tadeusz Jasiński, for many years the church parish of St. Theresa, Józef Lejsza, editor of Wilnoteka Edyta Maksymowicz, head of the Department of Education and Sport in the Local Government of the Vilnius District, Regina Markiewicz, scientists Krystyna Rutkowska and Józef Szostakowski.

PhD Mirosław Dawlewicz from the University of Vilnius and PhD Henryka Sokołowska from the Lithuanian University of Education, animator of sports movement in the Vilnius region, Józef Szuszkiewicz and director of the Cultural Center in Soleczniki, Grażyna Zaborowska were decorated with the Golden Cross of Merit of the Republic of Poland.

“As the President of the Republic of Poland I also wanted to thank you for being good, loyal citizens of the Lithuanian state, although you are of Polish origin. In this way you bear testimony about us Poles, that we are hardworking, diligent people, that we are people who respect their neighbors and respect the country in which they live. I am grateful to you as the President of Poland, because through you the image of Poland is built, a good image of our country, the country of your fathers “- said Andrzej Duda.

The President of Poland said that he is aware of the problems Poles face in Lithuania, related to with Polish teaching, with Polish language at high school. “There are problems. I will talk about the those that affect you with the President Dalia Grybauskaitė. We will try slowly. I hope, to overcome these problems,establishing together methods for solving issues that raise disputes or doubts, “he said. “But I am asking you to keep calm and do it in a good dialogue. It seems to me that Polish-Lithuanian relations at the political level are currently developing in the right direction, and I hope very much that these good relations will also translate into a better situation for the Poles living here in Lithuania,” he added. “You can be sure that I will talk to you about these important matters, which I have carefully demoted,” he assured.

The meeting at the House of Polish Culture in Vilnius was graced by the performance of the “Ojcowizna” team under the leadership Wioletta Leonowicz and the Wilenka Song and Dance Ensemble.

The meeting of the President of the Republic of Poland Andrzej Duda with his compatriots Wilnoteka was broadcast live.

Translated by Katarzyna Widlas within the framework of a traineeship programme of the European Foundation of Human Rights, www.efhr.eu.

Łapiński: we expect Poles to be treated as full citizens in Lithuania

Presidents of Poland and Lithuania: Issues of the Polish minority will be resolved