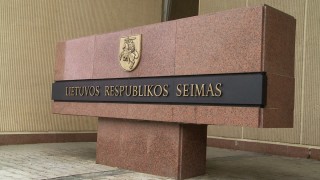 Seimas in first reading approved draft law on spelling surnames in the original version on the first page of the identity document, filed by social democrat Gediminas Kirkilas. It has been supported by 64 deputies, 25 voted against and 13 abstained from voting. Next step are the discussions in Seimas committees. Plenary session will once again discuss the project on the 20th of June. At the same time alternative project on original surname spelling on the second page of the passport will be discussed.

Introducing the project, Gediminas Kirkilas highlighted that this law is needed for citizens who married foreigner and have problems with surname spelling in documents and at the same time would help Lithuanian-Polish relations. ‘We are coping with a small matter that has became a reason of straining relations. So let us display goodwill and make a decision – it will not harm us. Some say that we are changing the alphabet. We do not change it, it remains the same. Others say that we are distorting public space. But public space has been distorted already for some time by names such as ‘Maxima’ or ‘Swedbank’. As you know, surnames of foreign book authors are spelled originally, so these letters have been used for a long time. There are less treats than upsides that could be gained along with our strategic neighbor – Poland’ – convinced Gediminas Kirkilas.

Project filed by Gediminas Kirkilas assumes spelling of non-lithuanian surnames in latin alphabet in original version has been supported by deputies from Liberals Movement and Electoral Action of Poles in Lithuania, everyone except one social democrat, majority of Lithuanian Farmers and Greens Union, as well as, speaker of the seimas Viktoras Pranckietis and Prime Minister Saulius Skvernelis.

According to chairman of Committee on Education and Science Eugenijus Jovaiša, the project of social democrats would ‘legalize bilingualism’. Eugenijus Jovaiša is a supporter of alternative project, according to which the original spelling of the surname would be allowed on the second page of the passport, while on the main page surname would be spelled with Lithuanian alphabet. Alternative projects has been supported by 53 deputies, 19 voted against, 25 abstained from voting. It has been supported by deputies from Order and Justice Political Group, majority of Lithuanian Farmers and Greens Union, including Ramūnas Karbauskis.

Both projects will now be discussed at committee meetings. Deputies decided that main commission will be a committee of Right and Rule of Law and additionally: Education and Science, Foreign Matters, Human Rights. Second reading has been planned for 20th of June.