L. Linkevičius: there is no alternative to close cooperation between Lithuania and Poland 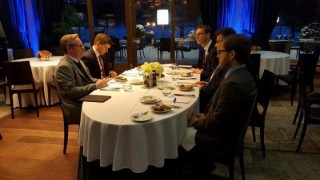 There is no alternative to close cooperation between Lithuania and Poland, said Linas Linkevičius, the Lithuanian Foreign Minister after the meeting on Friday, 13 January in Trakai, with Krzysztof Szczerski, the Secretary of State at the Polish President’s Chancellery. “Lithuania and Poland are the closest neighbours and strategic partners that have many interests and challenges in common, therefore, there is no alternative between these countries” – reads the Lithuanian MFA’s communiqué.

Krzysztof Szczerski is attending the Snow Meeting – the informal meeting of security policy experts in Trakai.

The meeting discussed bilateral cooperation, the situation of Polish national minority in Lithuania, the EU agenda and current affairs, security policy and energy security, relations with Russia, the situation in Ukraine, and the Eastern Partnership.

A lot of attention was dedicated to security situation in the region. “Right now we have to focus on a smooth implementation of decisions taken at the NATO Summit in Warsaw” – noted Linas Linkevičius. He thanked Poland for its participation in the NATO Air Policing Mission in Lithuania multiple times.

As regards the relations with Russia and situation in Ukraine, the interlocutors noted that it was important to maintain a unified sanctions policy towards Russia until the full implementation of the Minsk agreements, and to continue to support the effort to ensure Ukraine’s territorial integrity, as well as the reform process in this area.

They also emphasized the importance of the Lithuanian-Polish cooperation in the areas of energy and transport.

“Our cooperation with Poland is very important for the synchronization of the Baltic countries’ electricity system with the continental European networks, and to maximize the effectiveness of the Rail Baltica project, it is also important to continue to construct the Gas Interconnection” – said the Lithuanian Foreign Minister.

On the 20th of January Linas Linkevičius will visit Poland. On Thursday, the 12th of January, in response to the opposition conservatists’ questions related to chilly relations with Poland he said that he “would do his best to make a reset in these relations”.

On the occasion of the Freedom Defenders’ Day on 13 January, the Lithuanian Foreign Minister said in an occasional record that he was grateful to Poland for its support to Lithuania on the 13th of January 1991.

“Dear Poles, Lithuania will never forget warm support and solidarity that you showed on the 13th of January 1991, when Soviet tanks trampled Lithuanians, trying to crash our freedom. Ten thousand citizens of Poland gathered in the centre of Warsaw to show their support for Lithuania and condemn the barbaric actions of the Soviet Union. Poland expressed complete solidarity with Lithuania. We are grateful not only for the then political support, but also for humanitarian aid which flowed from different towns and cities of Poland. Unity and mutual assistance between our countries are very important also today. History shows that walking together, hand in hand, we can achieve a lot. We have to cherish our freedom” – said the Minister L. Linkevičius.

Linkevičius: We will do our best to make a reset in our relations with Poland

Research into needs of students from the Vilnius District Municipality: Who was Nemtsov and why Lithuanians are in the minority?