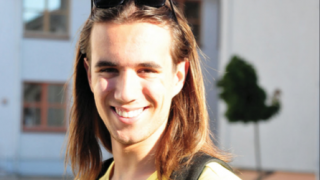 Konstanty Keda, from the new school year a third-grade student of the Polish Secondary School in Mickūnai (Vilnius region), became the protagonist of an article in the newest issue of the Lithuanian weekly magazine “Veidas”. “It’s Possible to Become One of the Best Students in Ordinary Regional School As Well”, is the title of the story about the talented secondary school student, and such a credo actuates Konstanty, who, in the previous school year, became a bronze medallist of as many as three Republican Olympiads, in biology, natural sciences, and Lithuanian, among national minorities’ schools. The article, published before the beginning of the school year, is a peculiar expression of respect on the part of the Lithuanian press towards the Polish education in Lithuania.

“If you want to learn and have a goal to reach, be a good student, you can be a medallist of Republican Olympiads even in a small rural school,” the pupil of the Secondary School in Mickūnai says convincedly.

Certainly, Konstanty Keda can be considered to be an eminent figure of the Mickūnai school: attending the sixth grade, he “skipped” part of the school year and was moved to the seventh grade; last school year, as a tenth-grade student (second grade of the secondary school), he got to the final of the TV programme “Children of the Lithuania’s Millenium” (“Lietuvos tūkstantmečio vaikai”), and this year he performed splendidly at as many as three Republican Olympiads. Before that, he also won regional olympiads in chemistry and biology, as well as took the third place at a regional olympiad in geography.

When asked if he considers himself a celebrity at least in his school because of the outstanding achievements, Konstanty admits that in fact he is one of the two students in the Vilnius region who have won quite a lot of victories in regional competitions, though he claims that the achieved successes will not mess with his mind, and that because of them he is not going to make less effort, “I can’t rest on my laurels. I’m in the National School Academy and often have contact with its members, who are equally good or even better. Apart from that, one’s achievements, knowledge can be assessed objectively at Republican Olympiads, and there I’m placed third so I must try hard to climb those two steps. I don’t believe that a bit of luck is a deciding factor at an Olympiad – in the larger part the win is made up of work, while talent and that luck don’t mean much there,” he says in the interview for “Veidas”.

The biology teacher and educationalist of the Secondary School in Mickūnai Eleonora Makowska says that accomplishments of such students’ as Konstanty are a good incentive both for teachers and students. They prove that you can’t achieve anything without work.

“There’s only one such a talented student in our school. Apart from that, he’s not very clever just in one narrow field. He can apply his abilities in a universal way. Of course, not only abilities determine his achievements: he works a lot at home, after classes. In general, the work in classes alone is not enough for students. Not much is managed to be done during that time,” the teacher tells the weekly.

Konstanty has a particular interest in biology. He chose it and decided to focus on it in the ninth grade when, on a Republican Olympiad in biology, he was seriously appreciated for the first time by being given an honourable mention.

Why did such a talented and motivated student, having completed eight grades, not go to one of the secondary schools in Vilnius that are considered prestigious? Konstanty says that he thought about that, yet did not use this possibility, as he did not want to lose the advantages that a small school has – in a small-town school teachers know students not only by a number in the class register but they also know well what abilities or passions each and every student has.

“I’ve been attending the same school since the first grade; my parents work there: Mum teaches languages, German and Russian, works in the library, and Dad lectures on economics, and so I have lots of memories, feel a kind of affection, too. Apart from that, one of my friends has moved to the Adam Mickiewicz Secondary School in Vilnius. She was accustomed to the fact that she was the first in her community, but when she started attending the new school, she realised there were many students better than she,” thus Konstanty speaks of the reasons for his staying in his secondary school.

He claims that he is aware of the fact that he will have to work hard and study all his life, using various resources. For him one of the ways of finding out new facts is contact with his peers whom he meets at Olympiads and at the National School Academy.

“Intercourse with the people I come across brings benefits even now. For instance, you’re talking with a friend, and suddenly you’re like: what a beautiful thought he’s just said, I could use it in an essay. Undoubtedly, knowing clever students will be useful in the future as well: clever students will be specialists in their fields. Apart from that, it’s always useful to know somebody who’s an expert in fields you have no knowledge about. For instance, it may happen that my child will be interested in music and I won’t be able to explain them anything concerning the scale, but I will be able to refer him to a friend of mine who knows a lot about music,” the clever boy speculates.

Czubiński met with Šimašius. The mayor of Vilnius accuses AWPL of provocation

Pukszto: The next Parliament will have to rebuild the relations with Poland