The Presidents of Lithuania and Poland Discussed the Geopolitical Situation 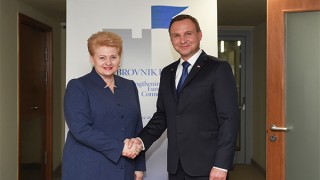 “We find a common language because the challenges are common and only together we can do our best” – said the president of Lithuania Dalia Grybauskaite after the conversation with the Polish president Andrzej Duda. The meeting took place before the beginning of a two-days long forum of Three Seas initiative countries (the Adriatic Sea, the Baltic Sea and the Black Sea) in Dubrovnik.

After the meeting of the presidents, the Lithuanian president’s press service issued an announcement which mentions that during the meeting the presidents of Lithuania and Poland talked about the Polish-Lithuanian cooperation in the field of energetics and security, discussed the bilateral strategic projects, cooperation within the EU and NATO, the geopolitical situation and the possible consequences of the Brexit.

Dalia Grybauskaitė stressed that it has already been her fourth meeting with the President Duda. The previous meetings also took place during international forums, however, for the first time, the discussion was bilateral.

“We find a common language, because the challenges are common and only together we can do our best. I am really glad that we see the security issues and other European matters alike. Such matters as Brexit, migration, energy security and the power plant in Ostrowiec” said Dalia Grybauskaitė.

The minister of the Polish president’s office, Krzysztof Szczerski, said to the Polskie Radio that the main themes of the meeting of the presidents were: “the regional security, the reform of the EU after the Brexit and the bilateral relations”. Andrzej Duda and Dalia Grybauskaite agreed that the key to building regional security is a full implementation of the agreements made at the summit of NATO in Warsaw. Regarding the reforms of the Union after the Brexit, Krzysztof Szczerski said that for the Polish and the Lithuanian presidents the full coordination of the positions of the Visegrad Group, as well as the Baltic and Nordic states in this case is important.

Czubiński met with Šimašius. The mayor of Vilnius accuses AWPL of provocation