Steles commemorating Dmowski and Paderewski will be set up in Zalavas 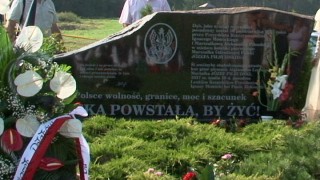 On the 15th of August, on the Polish Armed Forces’ Day celebrated on the anniversary of the victorious Battle of Warsaw 1920, there will be two more setles uncovered in Zalavas. The Association of Poles in Lithuania, which takes care of the native place of Marshal Jozef Pilsudski, will honor Stanislaw Roman Dmowski and Ignacy Jan Paderewski, both highly meritorious in regaining Polish independence.

Representatives of the Polish Embassy in Vilnius, the Association of Poles in Lithuania and other Polish organizations and institutions operating in Lithuania, will pay a tribute on the 15th of August to the creator of the independent Poland – Marshal Jozef Pilsudski. The ceremony will take place at 10.30am at the Cemetery at Rossa.

As every year, the celebrations of the Polish Armed Forces’ Day will be also held in Zalavas, the place of the family home of Marshal Jozef Pilsudski. At the avenue of National Remembrance in Zalavas, there will be the steles uncovered commemorating Roman Stanislaw Dmowski (politician, journalist, minister, co-founder of the National Democratic Party, which acted for the reconstruction of an independent Poland) and Ignacy Jan Paderewski (independence activist and politician, prime minister and the minister, who made a great contribution to the matter of the rebirth of an independent Polish Army and Poland. He was also an outstanding pianist and composer).

Celebrations in Zalavas will begin at 2pm.

Zalavas is an important place for Poles as the Head of State Jozef Pilsudski was born and spent the first years of his life there. Piłsudski mansion burned down in 1874 and the family sold the property then. After Poland regained its independence, the idea of rebuilding the manor appeared. After the death of Marshal, the Zalavas Reconstruction Committee decided to transform Zalavas into a place of national memory. In 1937, an opening of a park-reservation took place. It was decorated according to the project by engineer professor Romuald Gutt and gardening engineer Alicja Scholtzówna. The ceremony was attended, among others, by President Ignacy Moscicki and marshal Alexander Piłsudska. Within the foundations of the mansion, an oak was planted and it still grows today. The outbreak of the Second World War, however, stopped the continuation of the professor Gutt’s project.  After the war, the area was completely destroyed and sovkhozs were built in the place of the park. Only after the 2005, when APL became an owner of a 5-acre plot, the gradual restoration of a dignified appearance of the Zalavas began. In 2010 the first oak trees were planted and the first steles were set up in the Alley of National Remembrance.