Slowacki’s „Hymn” on the Vilnius streets 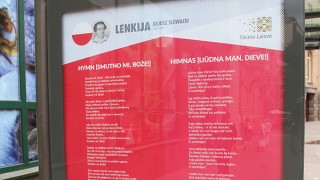 It has been 25 years since on 27th of August, 1991, in Brussels, the declaration regarding resuming diplomatic relations with the Baltic countries – Lithuania, Latvia, Estonia- was signed. The Embassy of Netherlands in Lithuania made a proposal to the diplomatic institutions from European Union that are accredited in our country.  The proposal concerned commemorating this historical fact by popularization of poetry stanzas about freedom and independence in these countries’ languages. At the public transport stops in Vilnius, poems of poets were placed. Poland is represented by Juliusz Slowacki and his ‘’Hymn” [I Am So Sad, o God!].

On the 27th of August, 1991, ministries of foreign affairs from twelve countries from then the European Community accepted Lithuania (as well as Latvia and Estonia) by issuing following statement: “The Community and all of its members are warmly congratulating the Baltic countries the restoration of sovereignty and independence that were lost in 1940. […] After a period of over fifty years, the time has come for reclamation by these countries their rightful place among European nations. The Community and its member are confirming their determination for immediate establishing diplomatic relations with these countries’’. It might be said that that’s how our trip to European Union began.

The Embassy of Netherlands’s initiative was enthusiastically supported by embassies of 23 UE countries accredited in Lithuania, including Polish Embassy and Lithuanian Ministry of Foreign Affairs. They joined the project by submitting poems about freedom and independence. The poem submitted by Polish Embassy is Juliusz Slowacki’s ‘’Hymn” [I Am So Sad, o God!] in Polish and Lithuanian language versions. It was placed in glass-cases at two public transport stops in Vilnius: on Jogailos street (towards Giedymin Alley, next to Iki shoop) and on Bazilijonų Street (towards the Gate of Dawn, near “Pod Hala” market).

All poems that were submitted to the project might be read here: www.kartu25.lt and www.together25.lt. There is also a map of places where the poem are located. The event will last till mid-August.

Linkevičius: We clearly see that the cooperation between Poland and Lithuania is very intense

“I hope that after Brexit, the European Union’s position towards Russia won’t change because, in principle,…
Znad Wilii September 23, 2019