Renovation of Rossa: crisis situations are the priority 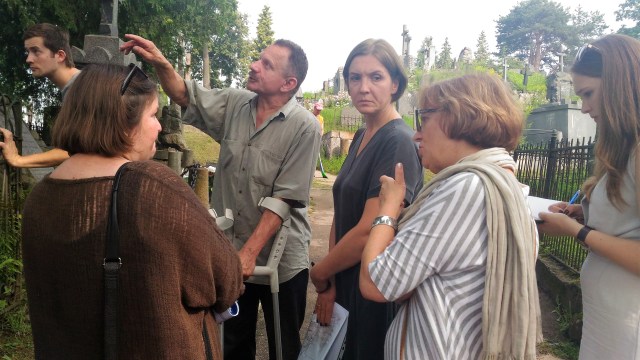 The most significant question professor Smaza was asked by the representatives of the self-government was about reacting in crisis situation that concerns rescuing deteriorated monuments Fot. the author

One year ago, Vilnius local authorities announced that works on the rearrangement of Rossa will have been finished by the end of 2018. 3 milion euro was distributed for this purpose. The money were collected from the Europan Union’s sources so the works are in a constant progress. Project producers often consult with Polish partners when it comes to the matter of this renovation.

Professor Janusz Smaza is a common guest in Vilnius. Many traces of his conservatory activities might be also find there. One of his first works in Lithuania was renovation of Marshal Mausoleum and Polish soldiers’ accommodation at Rossa. He currently stays in Vilnius due to personal reasons but thanks to the director of  Social Committee for the Care of Old Vilnius Rossa, Alicja Klimaszewska and the results of her persuasion, Smaza agreed to consult on the renovation of some statues that is planned by the Vilnian self-government. The most significant question professor Smaza was asked by the representatives of the self-government was about reacting in crisis situation. There is no shortage of places at Rossa where the intervention is needed immediately and the new challenges constantly appear, as well. A few days ago, a wooden statue of one of the  Lithuanian book carries fell down. How to react in a situation like this? How to protect statues from further devastation?  Most of all, Professor Smaza is a practitioner and that is why he answered all the question without any problems: those regarding rescuing wooden statues and also those made of stone or metal elements. By the way, it was possible to find that there are still many secrets hiding behind Rossa. Maybe, after the renovation, some of the unavailable places will become available for sightseeing, like in the case of Żylińscy’s Chapel. Inside the building, there is a beautiful relief depicting the crucifixion scene. After the renovation, open-work doors will probably be placed in the chapel and tourist will be able to look inside though them. For now however, the relief need an immediate conservation.

„Renovation is necessary but the question should be asked about the form in which it should be conducted – professor Smaza notices. –‘’We need to consider whether to renovate it in full by bringing it to the initial state or to preserve the relief and keep the current dramatic mood of the painting’’. A lot of new ideas for a further Polish-Lithuanian cooperation popped up while watching the chapel. ‘’It is a great task for a master’s thesis’’- professor thinks. He has conducted many similar projects so far with his students. ‘’We are looking for the best experts –the Jurgit Vyrukaitienė landscape architect stressed. – We are open to a cooperation with Poland. In particular, I personally value previous meetings with Małgorzata Rozbicka, who is a chief of National Heritage Institute”. The meaning of a good cooperation is also stressed by Dalia Bardauskienė, an architect and advisor of the Vilnius Mer, Remigijua Šimašius.

‘’I engaged in the project a year ago after my meeting with Polish ambassador Jarosław Czubiński. I realized then how important the cemetery is for the Poles, Lithuanians and also for the Polish-Lithuanian relations’’. Bardauskienė stressed that thanks to the cooperation and a visit at Powązki cemetery in Warsaw, she started to appreciate a meaning of information from the perspective of tourists. Adequate information points will soon appear at renovated Rossa. According to Monika Čekanauskaitė, who represented Vilnian Monument Preservation Department at the Rossa meeting, we do not have to be afraid that after the renovation polish souvenirs will disappear. ‘’The cemetery is a historic object and we don’t intend to conduct any changes, except from renovating the existing objects’’. The project of arranging the Rossa cemetery has begun to form  a few years ago. The works are systematically proceeding due to the fact that many environments are interested in their realization. Of course, city authorities want the arranging of the cemetery, but Polish organizations and tourists who willingly visit that place are also supporting the idea. Finally, European Union came to help the Vilnian necropolis. Most of the sources for the realization of the project come from its funds. Self-government finances a plan development but the works on organization of the cemetery will be financed from the EU funds. Investment budget amounts to 3 million euro. It seems to be a lot, however conservatory works are highly expensive. ‘’Three million is exactly what we need for completing the first stage of works’’ – Dalia Bardauskienė claims. The first stage of works focuses on crisis investments – renovation of statues whose state threatens their existence. Unfortunately, a beautiful location of Vilnian necropolis in a hilly area might be causing dangers. Land may occasionally slump what is a serious threat not only to the monuments but also tourists. Another serious threat is flora. A lot has been already done in this case. A process of rating the tree stand has already been finished what allowed to eliminate trees that were posing the biggest threat.

Organizing the cemetery at Rossa is a great challenge. The historic necropolis is situated on 11 hectares and around 14 thousand tombs are located there. 263 statues are the object of the cultural heritage. At the cemetery, there are also 12 chapels built in various styles. Self-government has already evaluated stage of a tree stand and approved the concept of a comprehensive arrangement. The works are expected to be finished at the end of 2018. They mainly refer to protection from collapsing hills that threaten statues and graves. Renovation of 6 chapels is also in the phase of planning.

Memories of the “Vilnius Word”: Every day I regret that there is no such a journal

Zalewska on Polish education in Lithuania: Driven and prompt actions are needed

“By December experts from Poland and Lithuania have to prepare appropriate solutions to the issue of Polish…
Znad Wilii June 30, 2017

3,500 euro collected for the restoration of Professor Sławiński’s grave. Fund-raisers are underway

The radio station Znad Wilii is celebrating its 25th birthday. Already during the jubilee celebrations on…
Znad Wilii June 26, 2017

As part of celebrating the 25th birthday of the Radio Znad Wilii, which is on the…