The Poles in Kriaučiūnai commemorated the heroes of the Vilnius region 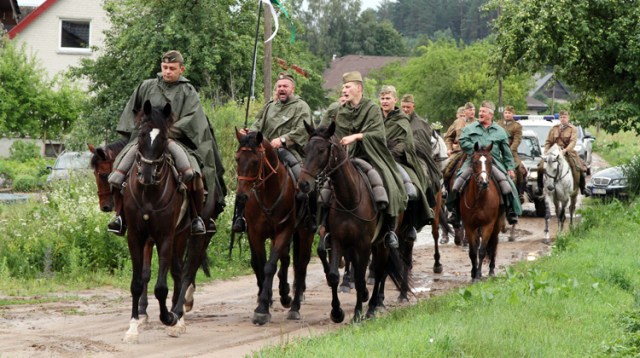 The presence of Polish uhlans, the participants of the fourth Uhlan Rally "Vilnius region — historical overview", made the ceremony spectacular. Fot. Marian Paluszkiewicz

The Polish fight for Vilnius against the German occupier ended in Kriaučiūnai. Priest Józef Aszkiełowicz said at the beginning of the religious service: “We are praying for those who fought for our lives and freedom” . 72 years ago, near Kriaučiūnai, the Home Army fought their last battle with the Germans. This place, every year, at 3 p.m. we celebrate a solemn mass to commemorate the fallen ones. The time is symbolic. In 1944, exactly at this time the battle came to an end.

The solemn mass was officiated by pr. Józef Aszkiełowicz.
“We are at this unique place to commemorate the sons of the Vilnius region who laid down their lives,” said the priest while starting the prayer.
The people who gathered prayed for all of the Polish soldiers who have fallen in combat during the Second World War, as well as for those who were murdered in the Soviet camps. The people prayed also for the victims of the massacres in Volhynia and the Poles murdered in Ponary.

On behalf of the President of the Republic of Poland, Adam Kwiatkowski, Chief of the Cabinet paid tribute to the fallen ones. Flowers were also laid by the chairwoman of the Polish-Lithuanian Parliamentary Group Iwona Arent and by the vice chairman Grzegorz Janik. The delegation from the Office for War Veterans and Victims of Oppression with Jan Józef Kasprzyk, acting the Chief of the Office, was also present.
The fallen were commemorated also by the representatives of Consular Department and the Embassy of Poland in Vilnius, the Association of Poles in Lithuania, veterans, soldiers of the Home Army, and naturally the Scouts. However, not only they remember about the heroes. Among those who laid the flowers were the children brought by their grandmothers and grandfathers for this remarkable lesson about the Polish history.

The presence of Polish uhlans, the participants of the fourth Uhlan Rally “Vilnius region — historical overview” and the members of the Vilnius Club of Historical Reconstruction of garisson in Naujoji Vilnia, made the ceremony spectacular. The artistic program was prepared by the Multipurpose Cultural Center in Rudomino.

The battle of Kriaučiūnai was the final one in the battle of Vilnius. The Second Grouping of AK(the Home Army) fought against the rest of the German garrison of Vilnius (3 thousand people), who broke through the Soviet encirclement in the morning on July 13.
After long hours of fighting near the area of the villages Kriaučiūnai-Naujasodis, both sides suffered significant losses. About 100 soldiers of AK died or went missing, including the Commander of the Home Army 1st Wilno Brigade Czesław Grombczewski “Jurand”. The Germans suffered losses of hundreds dead and taken captive. On the same day, the soldiers of the AK have slung the red and white flag on the Gediminas Tower.

During the fight, and for several days thereafter, the Soviet-Polish relations were quite good. The radio-phonograph sent on 14th July to London by the Commander of district AK Nowogródek, the Silent Unseen, Lt. Adam Szydłowski “Poleszuk” reported: “Vilnius captured with substantial contribution of AK, which entered the city. Massive pounding and losses. Good relations with the Soviet army. The talks are in progress. Vilnius is experiencing a sadly short, yet very happy moment of freedom. July 14, Polishness of the city can be felt even in the air. Plenty of our soldiers. Polish anti-aircraft defense service. In factories and workshops committees and Polish boards are being formed. The administrative authorities can disclose any time now. Lithuanians are not present”.
However, in accordance with the Soviet plan, the Polish flag was not supposed to wave over the city for long. Three days later in Vilnius, the Soviets secretly arrested Lt. Col. “Wilk” and in the afternoon also a large group of officers of AK who were invited for a briefing to the village of Bogusze. The next day, from dawn they proceeded to disarm the troops of the Home Army. Despite trying to get out of the encirclement and facing the fight in the Rudnicka Forest, most of the Polish troops surrendered or disbanded. Thousands of soldiers were placed in the camp in Medininkai. Considering their refusal to join Berling’s army subordinated to the Soviets, they were deported to the USSR and forcibly conscripted into the ranks of the Red Army.

Names Spelling Issue Will Be Passed to the Next Seimas