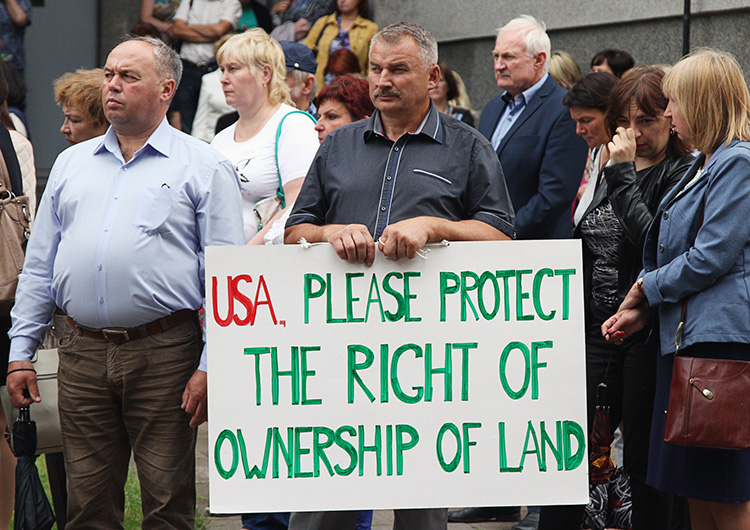 For the second time the representatives of national minorities called for the protection of their rights outside the USA embassy building Fot. Marian Paluszkiewicz

A demonstration in defence of national minorities’ education and against discrimination in the return of land in Vilnius Region took place on 16 June outside United States embassy building in Vilnius. Protest was organized by the Parents Forum of the Polish Schools in Lithuania, Strike Committees of the Polish Schools in Lithuania and Committees of School Defence; despite rainy weather, several thousand people attended.

Renata Cytacka, Electoral Action of Poles in Lithuania (AWPL) Vilnius City councillor, the president of    Parents Forum of the Polish Schools in Lithuania welcomed the attendees and reminded that it was not the first time when the representatives of national minorities gathered outside the USA embassy building.

— Today we gathered here again because we have seen some positive outcomes after our first protest here. We are already discussing with Lithuanian authorities and we hope that our friends from across the Ocean will help us make actions follow the discussions — said Renata Cytacka.

She has also mentioned the tragedy in Orlando, where at least 50 people were killed and 53 injured as a result of assassination.

— As we know, our friends in USA are currently having a hard time. We are deeply moved by the shocking news from Orlando. On behalf of everyone here I would like to express my sympathy and give my condolences. Our thoughts are with the victims’ families and everyone affected by this tragedy — said Cytacka. After, the representatives of students and teachers communities laid flowers and candles in honor of the dead. Their memory was celebrated with a minute of silence.

Again the attention was drawn to the discrimination and unfair procedures of land return on the Vilnius Region, so Polish minority often cannot recover patrimony seized by the Soviets.

Edyta Tamošiūnaitė, AWPL Vilnius City councillor, familiarized the audience with the content of  the petition, which then has been handed over to the USA ambassador in Lithuania. The councillor emphasized that national minorities and multiculturalism are important values of a democratic country, that is why they need to be taken care of.

— During the whole period, since Lithuania regained its independence, the land has not been returned to its rightful owners. This issue especially applies to the Vilnius Region where mainly the representatives of national minorities reside. We do not understand why our fathers’ land is still not being returned to its rightful owners. That is why we are again forced to organize a public protest, during which we also support the Committees established by parents, which defend their children’s right to learn in their mother tongue from the 1st to 12th grade — said Tamošiūnaitė, presenting the petition. Also students, teachers and parents called for the USA political support in retaining the Polish education and the accreditation of high schools.

Will the palace of the Tyszkiewicz family in Landwarow be saved?

USA Protect Our Rights: Rally by the Embassy of the United States

The MP of the Polish party in Lithuania, Beata Pietkiewicz, at a conference with the Confederation…
Kurier Wileński January 27, 2022

The largest number of people live in Vilnius and Vilnius County, moreover Poles continue to be…