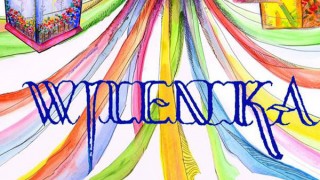 On Monday, 30th of April, 2016, at 1pm and 5pm, at the Dance Theatre in Vilnius (situated on 11 Kościszki Street), there will be a Jubilee Concert on the occasion of the 45th anniversary of the Polish Folk Song and Dance Group “Wilenka”.

The first in a post-war history of Lithuania, The Polish Children Song and Dance Group was established in 1972. Its founders were the members of ‘Wilia’, a group of teachers and parents. The position of initiator, art director and conductor belonged to Władysław Korkuć. The director of a dance group was Helena Rotkiewicz. Helena Marczyk, Janina Butėnienė, Alicja Klimaszewska and members of the Parental Commitee ( president Stanisława Zawadzka, Jerzy Surwiłło and the others) were in charge of the organizational matters.

After less than half a year of intensive rehearsals and preparations, the group had its debut at a stage of the Palace of Labor Unions and received loud applause. The Polish Artistic Song and Dance Group “Wilia” became a patron of young artists. Also, the name “Wielnka” emerged at that time.

The Student of a former “19th” (currently Wł. Syrokomla High School in Vilnius) were getting to know Polish folk, national and regional traditions. Also a choir that consisted of several dozen of people was creating a great impression.

In 1982, ‘’Wilenka’’ group, which was at a peak of its fame and was formed by several age groups, pompously honored its 10th anniversary on a stage of the biggest performance hall in Vilnis – at the Palace of Sports.

In 2002, celebration of the 30th anniversary took place at a stage of a newly built House of Polish Culture in Vilnius. Only a fragment of a rich repertoire (that in full consisted of a great number of Polish songs and national and folk dances from all over the Poland and multinational folk from the Vilnius region) was presented there. In 2004, ‘’Wilenka’’ group presented its newest show called “Zepsuty” that was based on Polish tradition and Vilnian customs.

The group was frequently participating in national and international contests and picnics.

Current ‘’Wilenka’’ group creates over a hundred of young artists – students from Syrokomla School in Vilnius and those who have already graduated but still cannot say goodbye to the group.

Rally at the U.S. embassy: ”We are forced to ask a big country for help”