The AWPL summarised the year 2015 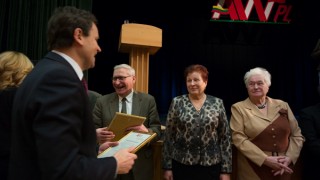 “An eight-percent support on a national scale that the Electoral Action of Poles in Lithuania [AWPL – Polish: Akcja Wyborcza Polaków na Litwie; translator’s note] gained in the municipal election in 2015 is the best performance of the party in the last 20 years,” Valdemar Tomaševski, the AWPL chairman and a member of the European Parliament, claims. The year 2016 is an electoral year as well – a parliamentary election will take place in the autumn, and earlier – in the summer – the party’s electoral congress will be held. The AWPL annual conference was dedicated to the summarisation of 2015 and presentation of plans for the new year. It took place in the House of Polish Culture in Vilnius.

During the conference chairmen of AWPL Divisions and mayors gave an account of the performance. In Vilnius City AWPL is in the opposition, in the Vilnius and Šalčininkai regions it exercises power on its own, and in the Trakai and Švenčionys regions it is in the ruling coalition. “Working in the opposition, AWPL councillors do not have any influence on the decisions made by the ruling coalition, but they put forward their suggestions, for example ones concerning the city budget and channelling funds to infrastructural projects and ones regarding the heritage conservation, which have been made recently,” Wanda Krawczonok, a Seimas member and the chairman of the AWPL Vilnius City Division, said. As she pointed out, accreditation of Polish schools is still the most serious problem: “We won’t give up until Poles’ postulates regarding education are not heard out.”

“We won the election, preserved schools, and carried out projects,” in such a way Zdzislav Palevič, the mayor of the Šalčininkai region, summarised the year 2015. As he pointed out, the Šalčininkai region made use of the opportunities that the EU funds make – 91 projects were carried out in the financial period of 2007-2015, and the investments in the development of the region amounted to €120 million. When it comes to the educational system, all secondary schools with Polish as a language of instruction acquired the status of “gimnazjum” status [an official secondary school status that prevents them from being transformed into a primary school or progimnazjum due to the school reorganisation plan in Lithuania; translator’s note].

Marija Rekst, the Vilnius-region mayor, mentioned mainly the carried out projects regarding school renovation and modernisation because – as she highlighted – education is the priority field.

Speaking of the plans for 2016, AWPL Chairman Valdemar Tomaševski reminded that it is the electoral year and that the party’s intention was to exceed the electoral threshold and gain at least as many seats in the Parliament as it has now [eight members comprise the AWPL group in the Seimas of Lithuania; editorial note]. He pointed out at the same time that the new division into constituencies was an opportunity to obtain more seats in the Parliament. He emphasised also the issue of “clean-record keeping”, about which each of the AWPL representatives in power should remember, and – speaking of threats – he stated that “the most dangerous fight with Polishness takes place in Polish.”

During the conference the seniors were honoured. These were people who had actively participated in the AWPL work, belonged to the General Council, occupied managerial positions in local governments, and are retired now. More than 50 people received thanks and gifts. Those who had passed away were honoured with one-minute silence.

The AWPL conference took place in the carnival, and so the participants were invited for a bit of entertainment – they could watch a performance of the dancing group “Jutrzenka” from Nemenčinė.

The AWPL conference and honoured strongmen of “Wileńszczyzna”

Lithuanian Parliament is urgently proceeding with a project on facilitating the change of the nationality entry…
L24.lt March 31, 2022