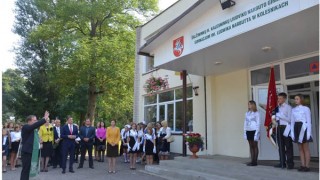 “National minorities’ schools are ‘educational ghettos,’ and so they should not exist at all,” Gediminas Grina, the former chef of the Lithuania’s State Security Department, claims and publicly voices such an opinion…

Gediminas Grina announced the idea of the close-down of national minorities’ schools on Facebook after the news of Russian school students from Lithuania going for a camp to Russia had appeared in the media. According to the information on 15min.lt, a group of students from Visaginas took part in a camp for scouts in the summer where they learned how to march, shoot, throw a grenade. It is not – as Grina says – the first situation of such kind.

Last year, due to the investigation concerning Lithuanian students’ participation in military camps within Russia (it regards two schools functioning in Vilnius with Russian as a language of instruction), some searches were carried out, which of course got not only the Lithuanian media, but also Russian ones interested.

Ramutis Jancevičius, the chief prosecutor of the Vilnius Circuit Prosecutor’ Office, announced then that it did not lay any claims to the students. He added also that the information provided by the media in Russia, in which they claimed that the camp participants were accused of treason, had no justification.

“Such schools do not teach civic attitudes, since they lead to the isolation of national minorities,” Gediminas Grina said in an interview for BNS. “If the basis for the existence of a school is membership of a national minority, it means that it is based on some other foundations. We could see it last year, and nothing has changed this year. Every headmaster has their truth, and the problem remains.”

According to the former chef of the State Security Department, there should be neither state nor private national minorities’ schools in Lithuania, with the exception of the diplomatic posts that are international or intended for the employees’ children.

“Such schools should not exist in principle,” Grina claims. “The existence of such organisations always entails funding sources, and in this case [military indoctrination; editorial note] sponsors won’t run out. We know what big sums of money arrive from the East.”

According to G. Grina, education in the languages of minorities should be limited to the Sunday schools, and what is the appropriate place for the national culture cultivation is a church. The former chef of the State Security Department thinks also that school-leaving certificates issued by the national minorities’ schools should not be accepted by the state.

Nowadays, Lithuania regards the Russian propaganda as one of the most dangerous threat to the internal security. During discussions concerning the methods of fighting it off, propositions of further limitations on Russian programmes and TV stations are those that come up most frequently.

In the utterance of the former chef of the State Security Department, however, there was no reflection on how the ban on the national minorities’ school existence would fit the European standards and refer to all the documents signed by Lithuania in this case. So maybe those who care for the security of Lithuania should try not to constrain the influence of the Russian media but create a competitive alternative for them. What should be constrained, however, are one’s own utterances, which are what the Big Brother looks for, as they are grist to his mill…

On the basis of: BNS

Former head of the Security Department: Schools of national minorities must be closed