Lithuanian – foreman, but another – workman. A way to nowhere in the Polish education field in Lithuania 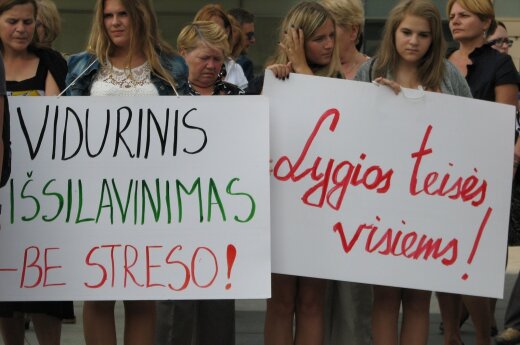 What made me come back once again to the topic of the Polish minority in Lithuania was upsetting statistics of the children from Polish families attending the schools with Polish as the medium of instruction.

In the Soviet period

To understand this problem and realise its extent it is necessary to go back to the Soviet period. Right after the war educational authorities of the Soviet Lithuania started the process of Lithuanisation of the Polish school system in the style of the 1918-1940 period; I do not mention the years of war here when everything that was Polish used to be eradicated and persecuted. Thusly those communists, showing off their nationality particularly, decided to “convert” local Poles into Lithuanianness and chose the shortest and most effective way to do so – by means of schools, more precisely, by closing the Polish ones and opening the Lithuanian and Russian.

From history classes we know that after the war there were two Polish secondary schools left in Vilnius: the male one and the female one. However, it turned out to be too much for the state educational authorities, so in 1946 they decided to unite the schools into one. Ksenia Szulc, the headmaster of the female one, was being forced by the Minister for Education, Albertas Knywa, to implement Russian in the school gradually, as it was to become Russian-language soon. Such moves of the educational authorities could not appeal to the parents of Polish children, so they started to intervene by contacting with the republic authorities. First they were put off on account of the lack of coursebooks in Polish. When the coursebooks eventually appeared, the parents got ignored, so, although it was dangerous, the intervention was made in Moscow and they actually won.

They won thanks to their determination, as well as plans of Moscow to make a national element of Poland opposable to that of Lithuania in those difficult times when Lithuanian partisans prowled forests and an anti-Soviet underground functioned. The central Soviet authorities just played with Polish-Lithuanian animosities, which even deepened during the war, and they played according to the principle of, “divide and rule.”

That Poles’ victory in Moscow, however, was paid with indoctrination of Polish schools in a spirit of the Soviet Union and emergence of Russian parallel classes in some of them to transform them in the future, as you can guess, into Russian ones. The plans of the Soviet authorities in Lithuania to open Lithuanian classes in the Polish schools that were mostly Russian did not cease either. In the case of the Lithuanian schools and classes it was justified by an influx of Lithuanian intelligentsia into the Vilnius Region, and in the case of Russian ones – by an influx – mostly from Belarus – of the working class, whose shortage could be observed, and Lithuanians were not even a bit eager to settle on that territory. So in the 70’s a lot of such bi- and even tri-lingual schools emerged, even with an upward tendency. I myself had “the privilege” to attend the bilingual one, where a Russian headmaster and her right-hand Russian literature teacher constantly rebuked us saying that we had not joined the appropriate class, as we should have decided to learn in Russian. A PE teacher was the third “Russifying” individual, who during a sports competition, as we can say, whistled in one direction only. Parents were also constantly urged to send their children to Russian schools and classes, as, purportedly, they would have better life start and perspectives afterwards; and a considerable part of the parents believed those assurances. Now my Lithuanian acquaintances sometimes tell me that after the war there were no attempts to Lithuanise Poles, as Lithuanians themselves were being Russified and afraid of “the big brother”, and that they just wanted to keep their possessions. I cannot agree with that. Such attempts took place and as a proof I am going to cite memories of a certain woman, who in 1947 in the Vilnius Region ended her education at a primary school at which lessons were conducted in Polish. According to her, a teacher of Lithuanian used to insult the children, as she could not believe that those Polonised Lithuanians did not understand Lithuanian, and none of the parents’ interventions involving the headmaster and the educational authorities of the region produced the desired results. She showed me also her primary school leaving certificate in Lithuanian in which there is, of course, her Polish surname but with a Lithuanian ending, and instead of her Polish first name there is an equivalent of it in Lithuanian. As we can see, history repeats itself.

In the independent Lithuania

Nowadays we have a similar situation with the difference that the methods of Russifying individuals has been taken over by Lithuanians, who have refined them and used under the guise of care of local Poles’ well-being. Closing the Polish schools first, however, is justified by a tough demographic situation of the country. I will begin with the second statement, with which I can partly agree, as the population of our country declines very rapidly. As it is stated in the census from 2011, there are 2,988,000 of us and during the last ten years the number of citizens dropped half a million. If this tendency continues, we will not reach the half of this century – we will disappear like some Phoenicians or Scythians. (I will point out, however, that the number of Lithuanians – to the disadvantage of others – is still increasing. Not long ago they accounted for 80%; now it is 84.2%.) So for this reason our authorities decided to close down some of the schools, join in bigger units some of the others, and all of this under the guise of school reorganisation. But for some reason Polish and Russian schools suffer the most. Probably you have read not long ago about a Russian school in Poniewież which “went down in history”, as it was transformed in a Lithuanian one, although Russian lessons for Russian children were left in the curriculum. I will not reinvent the wheel if I say that at the expense of national minorities they want to improve the demographical situation of the country, but it is done in one direction only – for the benefit of Lithuania.

To encourage Polish children’ parents – and not only Polish – to send them to Lithuanian schools, they act in two basic ways: propagandist and administrative.

As for the first one, there are talks with the parents, radio broadcasts and television programmes, as well as articles in magazines which are to convince people that sending children to the Lithuanian schools will provide them with better future. Poor mastery of Lithuanian by Polish secondary-school leavers is still emphasised, thus the attempts are still repeated so that a half of subjects in the Polish schools is conducted in Lithuanian, although the results of university entrance exams prove that the young Poles get on with Lithuanian quite well. As well the Matura Exam in Lithuanian, which was unified not long ago in Lithuanian and Polish schools, unequivocally does not conduce that “care” of Polish children. What is that, the next obstacle for the young Poles wanting to study at higher education institutions? But curricula are different qualitatively and quantitatively. Some forget also that Lithuanian children speak Lithuanian in their families. Thank God, the Polish youth has now the opportunity to study in Poland and not only there. And this “not only” means that English language teaching in both Polish and Lithuanian schools should be enhanced. Admittedly that English thing is a double-edged sword, as it will create a temptation to stay abroad forever for those studying there, while Lithuania will keep emptying.

Now let’s bring up the administrative way in this fight for our children’s souls and bodies. Our educational authorities’ activities in this field consist in, above all, better facilities in and financing of the Lithuanian schools. It is not surprising, as the money for those schools comes from the state budget, while the Polish ones are financed from the local government money. So where is the justice here? Coming back to that issue of the increased number of the subjects conducted in Lithuanian, I will just say that it is a transitional situation in that attempt to Lithuanise the Polish school system, since the knowledge of Polish among students will diminish until it disappears completely. The situation from Soviet times simply recurs, when parallel classes were created and it was done for the same purpose: then – of Russification, now – of Lithuanisation.

Do not think, my dear, that if you send your children to Lithuanian schools, you will provide them with bright future. There always will be some “passionate patriots” who will remind them about their origin, and during history classes they will be still repeating that Lithuania is the hub of the universe: it was and it is. Lithuanians, as usually, will paint a black picture of Poland, so after finishing a school a young man will not know who he actually is, forget Polish partially – a language which he did not know well to the time of starting school as well – and he will find himself in a peculiar state of spiritual emptiness. A marriage with a Lithuanian woman or even Russian one may mean that his children, with a 90% probability, will go to a Lithuanian school, becoming true Lithuanians; a probable situation with grandchildren is obvious then. In the Soviet period you sent your children to Russian schools. And what now? How many of them have become directors, people in high positions, or have made a career in any area of life? A scant percentage, since an obstacle for them was posed by the companions with red books, but ones who showed off their nationality particularly. The same is and will be now, as everything is done according to the principle of, “Lithuanian – foreman, but another – workman.” Do we have a lot of students – Poles in the most prestigious Lithuanian academy – at the Vilnius University? And how many people study at the military or police academy? Think of it sometimes “during long night countrymen call.”

This country, since the beginning of its existence (1918), has been programmed as a nation state, and the anti-Polish sentiment has always underlain this nationality. Lithuanians hoped they were more important, culturally speaking, than Russians, although since the 13th century they themselves started to take over all of the former Ruthenians’ cultural achievements and after some time it led to their full “Ruthenisation” in the southeast territories of today’s Lithuania and the adjoining ones of today’s Belarus. So they were not as afraid of Russification than they were and still are afraid of Polonisation – they feel culturally weaker than their Polish neighbours.

In conclusion I will just say – do not be greedy for those promises and beautifully equipped Lithuanian schools, as it is a way to nowhere.