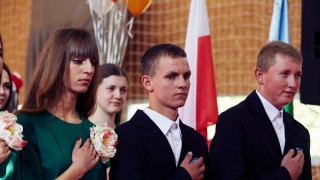 The community of the Polish school in Trakai has reasons to pride and satisfaction: owing to the resolution of parents, headmasters and pedagogical staff the institution gained the status of junior high school. Its headmaster Marian Kuzborski admits that a year ago while coming from local government to the school he didn’t have an idea what to tell teachers and the schools’ future seemed not bright. At the Friday ceremony of the junior high school inauguration, the atmosphere and emotions differed vastly: there was joy, satisfaction and the awareness that this was only the beginning.

Guests who arrived to congratulate the schooling community on the acquiring the status of the junior high school mentioned the hard road the parents and teachers went through but they also wished them not to rest on their laurels and reach other goals. In the talk with Wilnoteka, the school’s headmaster Marian Kuzborski stressed that the experiences of many years of struggle to gain accreditation united and integrated the schooling community. “Our success made us glad and at the same time we symphatize with the Vilnius’ schools which now fight for accreditation” – says Kuzborski and adds that Polish schools will always have only what they’ll win for themselves.

Polish middle school in Trakai has plans for the future. Children who attend the kindergarten group ‘Biedronki’ and the children form the preparatory group are its’ future. At the inauguration ceremony of the junior high school the groups’ performance couldn’t be missed. Children form the higher grades also made their entry. The highest grades’ students took the formal vow of being the dignified students of the school.

Polish school in Trakai opened a new card in the history of education in Trakai, which date back to XVIII ct. The parish school, which was established in 1777, was its predecessor. In the mid-war period in Trakai, the middle school with only the Polish language teaching was active for some time. During this time in Trakai the Teachers’ College was active as well; then it was removed to Naujoji Vilnia, which was a real forge of the pedagogical staff for the Vilnius region. The present building was erected in 1972. Previously, the school bore the name of Trakai Middle School number 1, which was later renamed the Middle School in Trakai. Marian Kuzborski admits, however, the schooling community thinks about a patron for the school.

1920: the citizens of Vilnius in the victorious war