The mission: Vilnius region. We have people to be proud of 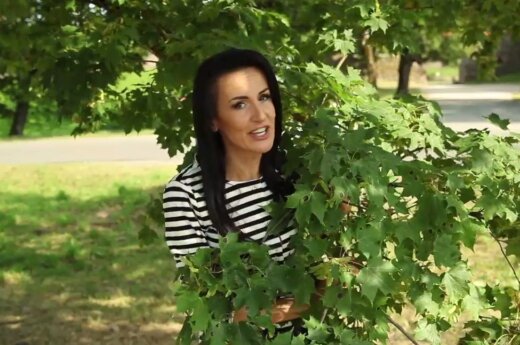 On Sunday, the first episode of the program Mission: Vilnius region, guided by a famous singer Katarzyna Zvonkuvienė from Vilnius region was broadcasted in the LRT TV. The program is devoted to people living in Vilnius region, their problems, which are also current to all Lithuanian citizens.

‘I am really glad that we start looking for something that is common to all of us from my family regions, from Medininkai, where I spent my childhood’ – the first journey of the program  started with the words of the program’s host.

The first stop of the TV team was the family home of Kasia in Medininkai. It can be deducted from the meeting with her mother that the producers won’t interfere in the language of the program as the mother and daughter’s greeting was in Polish without translation.

‘You see how I talk. Not very well. I worked as a secretary in a school but then, everything was in Russian. Later, when the documents had to be written in Lithuanian, it became too difficult and I quitted the job’ – Ms Halina, Kasia’s mother confided.

‘The number of inhabitants is falling in the town, as the number of students in schools and children in kindergartens. People look for better connection, entertainment and they move closer to Vilnius. The problems are human passivity and alcoholism but, generally, it is the same in each country’ – the leader of the Medininkai community Wiesław Tankeliun explained.

People became more closed; they do everything only for themselves and think only about themselves. There is a problem with work, but the one who wants, will always find it. Tolerance is important; we have to appreciate a person in a person’ – reflects Jelena Połujańska, the inhabitant of Medininkai.

The Pole pays less but more

The second issue which was mentioned was the business and more precisely, the entrepreneurship between Lithuania and Poland.

Andrzej Szostak, who does farming since 5 years, sells almost all his crops to Poland. He chose Poland because of a lesser risk and Polish prices are usually higher. Moreover, the production does not have to be transferred anywhere, Poles drive straight to the yard.

‘Polish price is slightly smaller than the Lithuanian one, though it’s known immediately here, on my yard. Whereas, the Lithuanian one is revealed to farmers only after research and that’s why it falls even below the Polish one’ – Szostak explained.

Last year, Poles offered 800 and Lithuanians – 900 litas. The farmer was tempted by the Lithuanian price; however, after the research it became clear that the grain is of lower category and it was estimated on 600 litas.

You lose not only on price; transport and nerves also cost. A Pole comes, takes and pays, and I can sleep calmly’ – the farmer said.

The next point of the program is the discussion about the current events of a week by the invited guests.

Successes of Poles in Lithuania

„Vida Montvydaitė, the director of the National Minorities Department, stated that at present, young Poles talk in Lithuanian, integrate, and should not have problems with finding a job; whereas not long ago, the image of a young Pole was on the contrary: not speaking Lithuanian and having trouble with finding a job. There are many examples when young Poles pursued and pursue a career. Was the earlier image false?’ – asked Komar.

‘It was partially false and partially formed unconsciously by Vilnius press, which did not pay attention to Poles in Lithuania and their achievements. Polish press in Poland and in Lithuania was rather interested in problems and not in successes; there were some, perhaps not many, though in show-business and other areas. Some of them are truly stunning: Antoni Mikulski, the deputy of the head of the Vilnius County Police Headquarters, Inga Czerniuk, the chancellor of the Ministry of Energetics of the Republic of Lithuania, top managers – Tadeusz Podworski and Zbigniew Gawerski, the owner of Blue Bridge – Zbigniew Gulbinowicz, show-business: Katarzyna Zvonkuvienė, Ewelina Saszenko, Tomasz Sinicki. We have people to be proud of’ – enumerated Radczenko.

At the end, journalist Agnieszka Olszewska investigated the life of Lithuanian Tatars.

The next episode of The Mission: Vilnius region, the next Sunday at 15:30on LRT. Read PL DELFI and you will know what it’ll be about.

Narkiewicz accuses the Prime Minister of Lithuania of lying

Vilnius Calvary without a Polish school

“This exhibition is a symbol that today takes on a special meaning of the fight for…
Kurier Wileński October 7, 2021