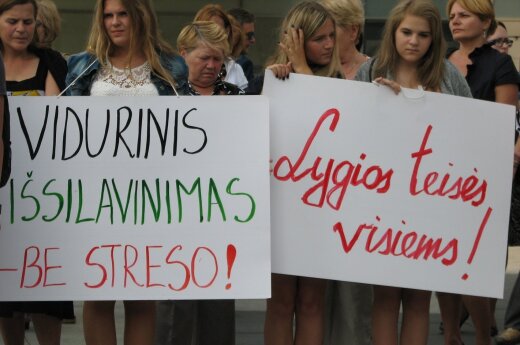 Polish Education Congress gives its support in decisions made by teachers and parents regarding the discriminating policy of the authorities of the Republic of Lithuania aimed at the Polish schools in Lithuania.

Poles living in Lithuania deserve for the real sponsorship based on the Framework Convention for the Protection of National Minorities under the auspices of the Council of Europe in Strasburg. The Republic of Lithuania became its party basing on the instrument of ratification submitted on the 1st July 2000.

The Convention sets up the national minorities standards; most specifically, it ensures equality before the law and the right to non-discrimination, provides protection of languages and cultures and anticipates the right to open the educational institutions. It might seem the Convention should serve as the starting point for further actions and cooperation, thus the Polish Education Congress shows its concern towards the new situation. The work of forming the citizen worthy of this name in the democratic, multicultural society is the mission of Polish schools, at the centre of which stands a student, a citizen of the democratic society and the participant of the education process. All attempts of erasing the children’s’ identity and their parents’ background have irretrievable outcomes in the child’s psyche and the later citizen. This is a great obligation to the society.

We’re convinced that both the government of the Republic of Lithuania and the Poles living in Lithuania who are the national minority will develop a cooperation plan, bearing in mind the history of both nations with the Polish culture’ anchorage of identity, the bridge which carried many societies through the time of wars, conflicts and captivity.

Speaking on behalf of the Polish education, we anticipate the beginning of talks focusing on the student as a young ambassador of multiculturalism and who has a human dignity – the highest value in the earthly hierarchy.

With kind regards in the name of the executive committee,

The chairperson of the Polish Education Congress