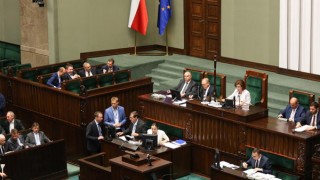 ‘Poles have been living in Lithuania for centuries. Especially In XIX and XX ct. they experienced the painful consequences of two national uprisings, the tragedy of two world wars, ethnic purges, exportations and resettlements. They endured all of these and preserved their identity. Thus, they are entitled to develop their own national culture and language, similarly to the Lithuanians in Poland. Education is an essential part of this culture. (…) Preservation of the Polish high school status, which is accepted by the local communities, constitutes the basis for preserving polish language and culture on the land where they existed for ages. Poles residing in Lithuania represent an important part of Lithuania, they‘re its loyal citizens. Polish language and culture are undoubtedly wealth of Lithuania’ – as the text of the Act’s project proclaims. MPs acknowledged that by limiting the access to education in Polish to Poles living in Lithuania the country violates the commitments within the Council of Europe which prohibit worsening the situation of national minorities.

In the Act’s project which was accepted by MPs the Polish Parliament applies to the authorities of the Republic of Lithuania ‘to undertake actions which would provide the Polish minority with proper conditions for good development of education in Polish, in accordance with the European standards’.

‘Lithuania has to answer the following question: Is it a modern European state or a post-soviet Republic full of complexes’ – says MP Jan Dziedziczak, (Law and Order party in Poland). ‘Often the Lithuanian party raises the issue of cooperation of Poles in Lithuania with the Russian minority. Full responsibility for the situation lies on the part of Lithuania, which unusually represses the Polish minority by breaking all the laws already signed and by breaking the European standards. I would like this would be said clearly in the Polish Parliament at the Committee’s meeting. National minorities have the right to talk with each other. In Poland, where minorities also cooperate to protect their issues, there are no repressions’ – states the MP.