Matura Exam in Lithuanian. The process for the mark at court. 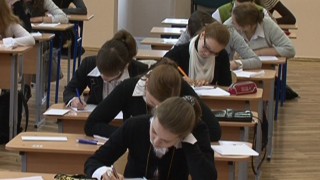 National Examinations Centre announced the results of school exam in Lithuanian, which took place on June 1st. The examination was sat by more than 13 thousand people, passed by 91.5 percent of them. The maximum score of 9 and 10 points received 1.85 percent of the high school graduates. Soon, the results of the state examination will be announced. Meanwhile, the results of the last year’s Matura Exam in Lithuanian are the subject of litigation. Students from Polish schools, supported by the European Foundation of Human Rights (EFHR), demands the cancellation of the exam results.

Before 2013, the high school graduates from Lithuanian schools passed the exam in the Lithuanian whereas minority schools – in the state language. The tasks were different (it does not mean that in non-Lithuanian schools they were easier). This resulted from differences in the curriculum: pupils from national minorities while studying, in general, had almost 800 hours less classes of the Lithuanian language and literature than their peers in Lithuanian schools. By means on the Education Act’s amendment constituted on 17th March 2011, there is one standardised exam. Although the difference in time devoted for the Lithuanian language and literature was not equalised, now all high school graduates sit the same exam. The truth is that in the works of non-Lithuanian students it is allowed for them to make more errors, but both in 2013 and 2014, the Matura Exam’s results in Lithuanian of national minorities schools were much worse in comparison with the results of the pre-unified exam. More people failed the exam, and much lower was the rate of maximum marks. Bad result of a high school graduate in Lithuanian basically is equal to losing the chance for free studies in Lithuania.

“By unifying the examination in the language and literature as well as approving the common program of teaching the Lithuanian language in both national minorities and Lithuanian schools, there were not equal opportunities of preparation for the exam created. By standardising the examination and due to the lack of an appropriate transition period (to prepare for it), the principle of balanced business of the constitutional nation was breached. Moreover, high school students from ethnic minorities are discriminated on the grounds of language and nationality” – considers the European Foundation of Human Rights operating in Vilnius.

These arguments were used in the complaints of two high school graduates who did not pass the exam in the Lithuanian language in 2014. A graduate of the Gymnasium John Paul II (a middle school) and a graduate from the Wł. Syrokomla Secondary School brought their complaint into court requesting the cancelling the mark from the Matura Exam and its repeating with regard to the situation.

As EFHR informed Wilnoteka, in the complaint of the graduate from the Pope John Paul II Gymnasium in Vilnius, there was used the argument that she had not had enough time to prepare for the unified exam in the Lithuanian language and literature, since high school students of ethnic minorities had had less time to learn the Lithuanian language. “Within the 12 years of schooling it is about 783 classes less, which gives the basis to claim about the infringement of the equal opportunities. It is worth noting that EFHR also requested for the designating of scientific expertise that would evaluate the opportunity to preparing for a unified exam in such short time. Nevertheless, the Vilnius Regional Administrative Court on March 30 this year rejected the complaint explaining that it is not justified. EFHR has prepared an appellate complaint “- the Foundation said.

The second case handled in the Vilnius Regional Administrative Court is identical. In addition to relying on the violation of the equal opportunities, there is, in the complaint of the Wł. Syrokomla Secondary School’s graduate, mention of the right to education. On June 1st in 2015 the Vilnius Regional Administrative Court accepted the judgment suspending the consideration of the case. The court held that this case is linked to the case mentioned above – the graduate from the John Paul II Gymnasium and suspended the proceeding till the solution of the first case.

Both the National Examinations Centre and the Ministry of Education and Science believe that graduates’ complaints are unfounded and, therefore, they demand the rejection of the application. “Exams are organized on the basis of programs approved by the Ministry of Education and Science, developed on the basis of educational programs. In addition, adopted in 2011, the program was new not only for students of ethnic minorities, but for all students. Since they had the same conditions to prepare for the exam within two years”- the Centre’s Director, Saulė Vingelienė, said in court.

EFHR is currently waiting for the consideration of the appeal: “The case concerns the public interest – the fate of the future graduates from national minorities schools, who recently were put the skids under – not only by standardising the Lithuanian language and literature exam, but also leading the school accreditation process by which the network of national minorities schools will be weakened and the possibilities of free choice of a school will be reduced.”

EFHR encourages this year’s high school graduates to seek for help – them and all people, as well as educational institutions of national minorities, which have the opinion that the changes made in education, including the process of schools accreditation carried out currently, have violated or violate their rights.

The Seimas Committee supports the original spelling of names

In the last issue of Nasza Gazeta, we once again raised the subject of the Polish…
Znad Wilii February 24, 2022