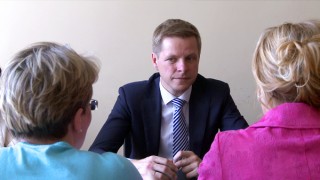 “When I see someone trying to destroy Polish education, I think to myself that this is unfair and unnacceptable. The Polish society must decide first about school statuses. So far, I’ve heard different opinions: John Paul II Gymnasium and Adam Mickiewicz Gymnasium take the same stance but Wł. Syrokomla School – completely opposite. The society should be resistant to pressure from politicians and decide what schools Polish families want” – in interview with Wilnoteka said Mayor of Vilnius, Remigijus Šimašius summing up visiting three Polish Schools.

John Paul II and Adam Mickiewicz Gymnasiums were the first schools with accreditation in Vilnius. “Mickiewiczówka” has a Gymnasium status since 1999, John Paul II Gymnasium – 2004. While John Paul II Gymnasium is a 4 year school Adam Mickiewicz Gymnasium have also 5 – 8 classes. City Council of Vilnius have already decided about not completing 5th classes since September 2015. The school will also transform into 4-year gymnasium. The managements of both schools want to recruit students from reorganised facilities which will lose completing 11th classes since September.

“We must not stop halfway through. If the decision about reorganising school network was made, we must be consistent and follow this. If the reform guidelines are included in legislation, one would want no concessions. It’s funny that the genie is out of the bottle a month before finishing the reform – looking for the high school specifics begins – vilnius.lt quotes Adam Błaszkiewicz, school principal of John Paul II Gymnasium.

The Mayor of Vilnius, Remigijus Šimašius, informed that both Capital Self-government and Ministry of Education and Science will decide about the future of Wł. Syrokomla school which is applying to become “extended” Gymnasium spanning from forms 1 to the final year of secondary school, ending with maturity exams. The local self-government have already sent an inquiry into this school: if the chosen curriculum complies with required standards.

Based on: vilnius.lt, own information

Lithuanian World Community against referendum on the issue of dual citizenship