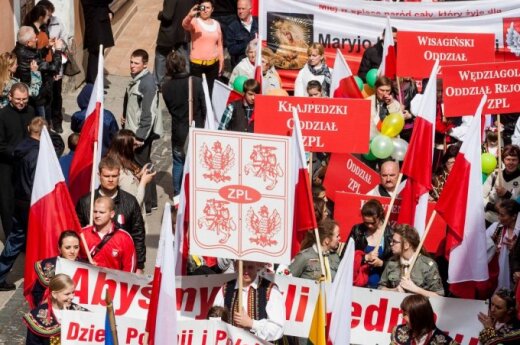 During my last visit in Lithuania, the inhabitant of Trakai, who is a half-Pole and a half-Lithuanian, began to express his great regrets about the local Poles. The main charge is this: how they can follow Putin. This insults the safety of the city which is inhabited by both Lithuanians and Poles.

What then could be done with these mean Poles in Lithuania? The answer I gave presumably shocked my interlocutor: ‘for 25 years the Lithuanian country did everything (not necessarily according to the European standards) to transform local Poles into Lithuanians. The result is that the Poles (in their vast number) are rather in favour of the status of homo sovieticus instead of becoming exemplar Lithuanians. The Lithuanian authorities have now only one solution regarding their Polish minority: The people should be aided in becoming genuine Poles.

A genuine Pole is the one who speaks well (in home as well!) and writes in Polish, reads Polish books and newspapers, uses Polish internet, watches Polish (or Polish-language) TV. It certainly cannot be done without solving numerous matters. Lately, such important issues as spelling of surnames or places and streets, returning land to its lawful owners should only be the beginning of a great process.

The subsequent actions seem indispensable to improve the status of the Polish minority in Lithuania: the introduction of the Polish TV in Lithuania, Polish-language broadcasts in TV and Lithuanian radio, the lawful facilitation to deal with formalities in departments in a national language. Moreover, in places where Poles constitute a percent constituted by law (as it is in Finland or Canada), each clerk at a national or council service shall know the Polish or Lithuanian language. In Lithuanian schools, especially in regions bordering with Poland, the introduction of Polish as a foreign language equal to German, Russian or French should not be avoided.

In attempts of implementing the model, the Lithuanian ‘patriots’ will surely speak and perhaps they will even persuade their followers that Russian influences are less harmful to Lithuania than Polish ones. Still it’s better to allow the Russian TV to spread rather than the Polish TV. However, in such a situation they’d better not complain that local Poles still confess the ‘Moscow’ faith. Nota bene how many Lithuanians (owing to the constant spread of the Russian media) also declare ‘the faith’ considering Putin as their hero. Unfortunately, the godfathers of these kinds of attitudes are the patriots: Julijus Panka, Gintaras Songaila, and even Vytautas Lansbergis and many others. The politically cunning fox such as Waldemar Tomaszewski, takes advantage of their actions and builds his sizable electorate on the anti-Lithuanian phobias, which often have grounds!

Beat your breast, Lithuanian brothers, and don’t deny that the force of the opposing party, which is undoubtedly the AWPL, has risen on demonstrations, for which only you provided reasons. While beating your breast you should also accept the fact that no Messiah, who’ll force the Lithuanian Poles to love Butkiewicius or Lansbergis and start to hate Tomaszewski, will arrive from Warsaw. The first step is yours; maybe more than one. As your waivers and, moreover, mistakes are prominent. What was the reason that for all the years of freedom (after the 1990) the only politics valid in the Šalčininkai District Municipality and in the regions bordering with Vilnius was the action modeled on the one which was simultaneously carried towards Donbas by the Ukrainian authorities– we leave the region to itself as some kind of a heritage park.

Now, the Lithuanian government shall definitely change its course of actions as well as methods. It should be understood that Poles in Lithuania aren’t some kind of immigrants (as e.g. local Russians) but the fellow hosts of the land since distant times. As the grand Lithuania with a capital in Vilnius wasn’t a single-nationality state. Present-day Lithuanians were definitely a minority there.

The situation nowadays is reminiscent of some kind of Talibans – the Polish and the Lithuanian one. Waldemar Tomaszewski has become a hostage of his own success. He cannot simply change the point of view of his party, as his party’s parliamentary club will decrease to one or two persons. Unless the Lithuanian government (which has a ‘Taliban’ around it) will decide to form the European electoral system in which the national minorities are not obliged to 5% (counted across the  country) of votes gained.

Is it possible to meet the above-mentioned postulates? I don’t know! I know, however, that that prize for this kind of actions (estimated for years) can be the situation where there’ll be no Poles in Lithuania but there will be Polish-speaking Lithuanians, the patriots remembering about Poland as their homeland.

Pre-graduation comedy! When will new cabarets be established?

“This exhibition is a symbol that today takes on a special meaning of the fight for…
Kurier Wileński September 21, 2019