The electoral convention of the Vilnius branch of AWPL 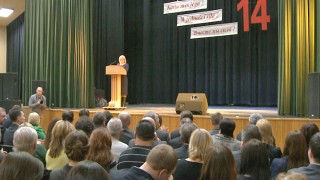 In the Polish Culture Centre in Vilnius, there was held  the convention of the Electoral Action of Poles (Akcja Wyborcza Polaków na Litwie; AWPL) in Lithuania during which the particular representatives to the Council of Vilnius City were given their candidate cards. The members of district electoral commissions, the presidents of various associations and the members of the Vilnius branch of AWPL took part in this event. After the end of the official part of the meeting, all participant were invited for a carnival party. Similar preelectoral meetings were held also in other regions, in which the representatives of AWPL run for a seat in local councils.

According to Waldemar Tomaszewski, the president of AWPL and the eurodeputy, the common electoral list of AWPL and Alliance of Russians is one of the most numerous in Vilnius. Out of 739 candidates running for seats in the Vilnius council, 101 of them are representatives of Tomaszewski’s party. ‘We are happy that our list is ‘feminine’ and young. Women constitute a vital link in our measures, they are active – men could learn this from them. We have also many young people, which is also a good sign, as this indicates that our organization brings positive and refreshing perspectives. The list contains representatives of 7 nations. Poles prevail, however, there are also Russians, Lithuanians, Belarussians, Tatars’, claimed Waldemar Tomaszewski.

‘We see that there will be intense battle in Vilnius. Our aim is to achieve at least the same result as four years ago, when we got 15% of votes in Vilnius and, as a result, 11 seats in the council. We are capable of repeating this result’, said Waldemar Tomaszewski. The president of AWPL, who is also the party’s campaign manager, admitted that the coalition of AWPL and Alliance of Russians will compete for electorate votes with the Lithuanian Russian Union, which also completed the list of its candidates in Vilnius. ‘We must convince the electorate that uniting together is more effective that creating divisions’, he emphasised.

During the convention, Jarosław Kamiński, the vice mayor of Vilnius, briefly spoke on results of AWPL representation’s work in the Council of Vilnius City over its last term of office. In his opinion, it has been a very fruitful period. ‘We have managed to settle many issues. Especially in the field of education, development of infrastructure and protection of cultural heritage. As far as education is concerned, we created 3 500 new places in kindergardens and invested over 20 million Lithuanian litas in the renovation of schools and kindergardens. Investment plans and project of piping waterworks to the suburbs of Vilnius. Over 1,5 million litas were allotted for renovation of Rasos Cmetery, also the renovation plan of the parish cemetery of St. Peter and St. Paul Church was prepared. We are not ashamed to look into eyes of our electorate, as our programme, we declared four years ago, has been quite well implemented’, said Jarosław Kamiński.

On the 1st of March, during the local government elections, about 1000 representative of AWPL will be working in district electoral commissions. During the convention, Waldemar Urban, AWPL’s member of the Central Electoral Commission of the Republic of Lithuania, spoke on what members of commissions should pay attention to during casting and counting votes, preventing electoral malpractice and abuse.

Waldemar Tomaszewski gave AWPL’s representatives running for seats in the Council their candidate cards. Since they were given candidate cards until voting sites will be shut down, the candidates are granted legal immunity.

The Vilnius Council of Non-Governmental Organizations will be established