65 years ago died the father of Polish photography Jan Bułhak 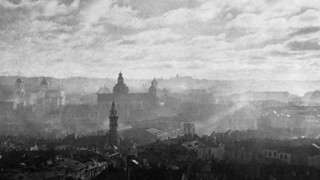 The 4th of February is the 65th anniversary of the death of the famous photography artist referred to as “the father of Polish photography” Jan Bułhak. In the years 1912-1919 Jan Bułhak managed the documentation of the Vilnius’ architecture; after Poland regained independence, he was the director of the Fine Arts Department of the Stefan Batory University in Vilnius, the co-founder and the chairman of the Photo Club in Vilnius. Thanks to the photos taken by Bułhak, Vilnius, like no other city of the former Republic of Poland, can be proud of the rich documentation of architecture and urban planning.

Jan Bułhak was born in Ostaszyn (land of Navahrudak) in 1876 into a noble family. He started his career as a photographer somewhere around 1905. Interestingly, he did not have his own camera back then – he used his wife’s. In 1908, “Życie Ilustrowane” organised a photography competition which goal was to praise the beauty of the Lithuanian landscape. Bułhak sent sixteen works marked with the name “Nietutejszy” (“Stranger”, “The Foreigner”) and won first place. Photos taken by him were published in the magazine. One year later he became a member correspondent of the Photo Club in Paris, and as he put it, “he started to excessively send his works to national and foreign exhibitions.” He gained popularity, but he treated it very ironically, calling himself “a parochial celebrity and a county fame.” In 1910, he met a respected painter and the propagator of culture in Vilnius Ferdynand Ruszczyc. The acquaintance turned into friendship. Thanks to the painter, Jan Bułhak got the position of “the urban photographer” in Vilnius, and his task was to create the photo archive of the city.

In the years 1912-1919, the first important and known cycle of Jan Bułhak “the sights of Vilnius” was created. Twenty six volumes of photos were created. All the works were made in the manner of pictorialism, i.e. paying much attention to esthetics, mood and picturesqueness. Full of grey tone, sort of the foggy views of the historic city is the favorite theme of Bułhak. In the similar style, the photographer before and after the war, documented also Warsaw, Cracow, Grodno, Zamość, Lublin, Kazimierz.

Unfortunately, the significant portion of the artist’s works did not remain; during the Second World War, during the fights for Vilnius, Germans burnt the town house on Orzeszkowska street (today Kudirkos square), where the photo collections of Bułhak were located. Ten thousand negatives and the photo albums – everything the famous photographer collected in forty years – were burnt. Bułhak did not break down; he tried to reconstruct the archive from the remaining prints. He also continued to photograph the motherland. After the war he moved to Warsaw, where he took thousand photos documenting the ruins of the city. He traveled around Poland and took photos in town and cities. He died on the 4th of February 1950 in Giżycko.

Apart from his own work, Bułhak was highly involved in teaching others and promoting Polish photography as a form of art, which might have the patriotic value. He emphasised the importance of creating “the native photography” that praises the charms of the motherland. He was the opponent of the avant-grade; he put a lot of effort into exqualising the values of photography and painting. He is the author of the word “photography”, which was to define photos that could compete with graphics or painting. He said: “We seek the ideal in painting and patterns in graphics.”

The works of Jan Bułhak are located in, for instance, the National Museums in Warsaw and Wrocław, the Museum of History of Photography in Cracow, Museum of Art in Łódź and the National Library of Poland in Warsaw. In 2013, the Polish Publishing Company in Vilnius published the album “Pejzaż Wilna. Wędrówki fotografa w słowie i w obrazie” (“The landscape of Vilnius. The journeys of the photographer in words and picture.”), which consists of photos taken by Jan Bułhak.

Active Poles from the Vilnius Region among the awarded