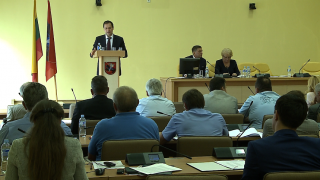 The administrative and state-governance reform, pro-family policy, an increase of retirement pension, changes in the taxation policy , changes in the education-financing system, and in the field of the foreign policy – effective cooperation with all the neighbours – these are the principal objectives of the election programme prepared by the Electoral Action of Poles in Lithuania – Christian Families Alliance (AWPL-ZChR). The programme and list of candidates of the party in the autumn parliamentary election were approved at the conference held in the building of the Local Government of the Vilnius Region on Friday.

On the national list of candidates to the Seimas, there are 141 names. Among the first ten there are the current Seimas members of the AWPL-ZChR: Michał Mackiewicz, Rita Tamašunienė, Wanda Krawczonok, Zbigniew Jedziński, Józef Kwiatkowski, Jaroslav Narkevič. The list begins with Valdemar Tomaševski.

Mayors of the Vilnius and Šalčininkai regions Marija Rekst and Zdzislav Palevič, who have been chosen in direct elections, have resigned from running for parliament.

Presenting the election programme of the AWPL-ZChR, Valdemar Tomaševski highlighted that it is based on Christian values, according to the words of St. John Paul II addressed to politicians: “truthfulness in the relations between those governing and those governed, openness in public administration, impartiality in the service of the body politic, respect for the rights of political adversaries, safeguarding the rights of the accused against summary trials and convictions, the just and honest use of public funds, the rejection of equivocal or illicit means in order to gain, preserve or increase power at any cost.”

The election programme of the AWPL-ZChR presupposes, among others, development of self-government, introduction of elections for the position of the elder and for the eldership councils, and at the same time the reduction of the number of the Seimas members from 141 to 101, support for families through introduction of the Family Card and benefits, which will amount to €120, for the second and subsequent child, an increase of the retirement pension, availability of basic medications for free for people over 75. In the programme there are also some suggestions concerning changes in the taxation policy, in the field of law and order, culture, and protection of heritage. As Tomaševski pointed out, the state should create conditions for the citizens of Lithuania who have gone abroad in search of a job to come back to their country. When it comes to refugees, however, the party has adopted an unequivocal stance – taking in economic refugees is not allowed – the state should first of all take care of its own citizens. Nevertheless, it is a duty to take in political refugees, Christians especially, who are persecuted in their countries. In the area of the foreign policy, the principal objectives are further European integration and effective cooperation with all the neighbours.

In the election programme of the AWPL-ZChR, issues regarding national minorities’ rights protection are not stressed. As Valdemar Tomaševski said, in this field Lithuania simply has to fulfil its international obligations and adopt specific solutions following other European countries’ example.

Valdemar Tomaševski told Wilnoteka that the “minimal task” is to retain what they currently have, i.e. the eight-member faction, but that an increase in the number of the representatives in the parliament is attainable.

The parliamentary election in Lithuania will take place on 9th October 2016.

National and ethnic minorities in the educational system on the example of Lithuania and Poland. Every…