In German street in Vilnius-a street plaque in German 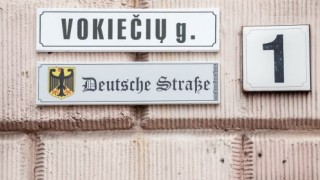 In Vilnius, we have another street, which is decorated with a street plaque with a name in a different than Lithuanian language. Such plaque, with a writing “Deutsche Straße”o in German st. (Vokiečių) was unveiled on Monday, on October 3th. This year, in a capital, had been put street plaques with names in Icelandic, English, Russian, Polish, Tatar, Yiddish and Hebrew. In Icelandic st. (Islandijos), at Washington Square (Vašingtono), in Russian st. (Rusų), in Warsaw st. (Varšuvos), in Tatar st. (Totorių) and in Jewish st. (Žydų).

German st. has been a popular urban commercial and cultural space since the XIV century. Sometimes, it was called a German City. The photographs, from later period show that writings on buildings on German st. were in various languages: Hebrew, German, Polish and Russian. In the second half of the XIX century, Jews dwelled on this street and that time in many houses in German st. operated a great number of shops, photographer’s shops, studios and workshops.

In the ceremony of unveiling a symbolic plaque with a writing “Deutsche Straße” took part: Germany’s Ambassador to Lithuania Jutta Schmitz, the Mayor of Vilnius Remigijus Šimašius, the Chairman of the German Community in Lithuania Ervinas Peteraitis.

The data of unveiling a symbolic plaque was not chosen by chance. On October 3th is celebrated the German Unity Day in the anniversary of unification which was in 1990. This year will be also celebrated a 25th anniversary of revival of Lithuanian-German diplomatic relations.

„What  makes Vilnius extraordinary, is the fact that during many centuries here could live, side by side, representatives of various nations, faiths and cultures. The unveiling of street plaques in different languages reminds all of us, that in everyday life, we should keep in mind our differences and realize that, we are neighbours and we build the same society and environment, in which we live. It is a city of all of us, which we create together”- said the Bishop of Evangelical-Lutheran Church in Lithuania Mindaugas Sabutis.

The plaque in German language was designed by the Director of Design at the Department of Architecture at the Vilnius Gediminas Technical University Docent Dr. Jonas Jakaitis along with a lecturer in this department Mindaugas Užkuraitis and his students.

Already October 14 the unveil of another decorative plaque in Vilnius. This time in Karaimska st. (Karaimų).